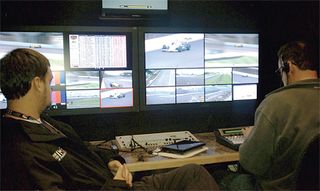 IMS Productions’ engineers Courtney Terrell (L) and John Wardrop in the company’s B2 truck production area.
INDIANAPOLIS—As the media and technology partner to the world-famous Indianapolis Motor Speedway, IMS Productions has just seen the dust settle on our annual marquee event, the 100th running of the Indianapolis 500, billed as the greatest spectacle in racing and considered one of the three most significant motorsports events in the world. With that said, IMS is busy year-round through our partnership with the IndyCar.

IMS Productions' services encompass field, remote and studio production, as well as post production and satellite. For the past year, we've been using Panasonic's AV-HS450N HD/SD video switcher. This has proven to be a real workhorse, handling assignments ranging from switching international feeds, feeding large screen displays, and Web streaming.

The HS450N gives us high-level HD production power and is easy to use. It features a built-in dual multiviewer that displays as many as 20 different images on two monitors (up to 16 on one screen), eliminating the need for multiple monitors.

PLENTY OF INPUTS AND FEATURES

The switcher comes standard with 16 HD/SD-SDI inputs (four with switchable upconversion, and eight with six-axis color correction), as well as four HD/SD-SDI outputs and two scalable DVI-D outputs. It has full 10-bit HD processing for maximum picture quality, and is a flexible, cost-effective solution for the control room system in our "B" unit mobile production system.

We were attracted to its small size as well as its high input capacity and price point. The switcher has really demonstrated its versatility, and we've come to rely on its input mapping, renaming function, multiviewer displays and keying for logos.

The weeks leading up to the Indianapolis 500 are probably our most intense of the year, with personnel and production gear held to the highest performance standards. The HS450N excelled throughout the event.

The main assignment for the switcher was to provide a pool feed of preliminary course runs to affiliates and international clients. Being able to genlock the AV-HS450N to our main truck's video source helped with capacity issues, as we had so many cameras on the track. Another feature that proved to be a big plus was the switcher's onboard graphics capability, which we used to feed the video displays around the race track.

Throughout the long racing season, we've also found many other uses for the HS450N. We took advantage of the switcher's flexible graphics configurations in generating multiple displays in the control room. And at all of our races, the HS450N has provided a clean version of track activity for the production of video news releases. Also, at the American Le Mans and the Pirelli World Challenge Series events we've routinely deployed the switcher for Webcasting, as well as to archive material for general storage, for post, and for network replays on ESPN and the Speed Channel, among other distribution outlets.

The HS450N has been with us every race this season and, without a doubt, it's been a long-distance performer for us.

Neal Mastel is an engineer with IMS Productions and may be contacted at nealmastel@gmail.com.

For additional information, contact Panasonic at 877-803-8492 or visit panasonic.com/broadcast.