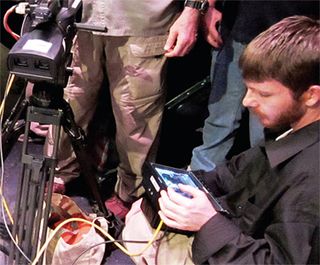 Sean McGowan uses a Panasonic BT-LH 910 monitor to evaluate 3D setup on the set of “Avenue Q.”
STUDIO CITY, CALIF.—Vertical has been at the forefront of 3D television content creation, developing and producing several high-profile documentaries for iN Demand, which distributes transactional VOD and PPV content. Our 3D projects have included a short-form series about extreme sports, as well as longer-form productions profiling the New Orleans Mardi Gras, Kentucky Derby, the last launch of Space Shuttle Atlantis, and others.

All of these projects were shot with Panasonic AG-3DA1 full HD 3D camcorders, and we used Panasonic BT-3DL2550 3D production displays for monitoring on location. In our most recent shoots, we've also employed Panasonic's latest LCD monitor, the BT-LH910, a portable 9-inch model. It has the company's newly-developed 3D assist functions, which we've used on our 3DA1s as an electronic viewfinder.

A PEEK INTO THE 3D FUTURE

A deciding factor in convincing ourselves that we should move into 3D production was actually seeing the compelling 3D images produced by the 3DA1 and displayed on the 3DL2550 at an industry show before this equipment hit the market.

We've found that the 3DL2550's dual HD-SDI and DVI interfaces are big assets. The monitor's multiple displays—audio levels, crosshatch overlay for parallax confirmation, timecode, waveform, vectorscope—are really useful. And the full 1920x1200 resolution display provides excellent color performance. We've used the monitor's active BNC loopthrough feature for routing signals from the composite outputs of a jib-mounted Panasonic 3DA to a 3DL2550 monitor and then back to the jib monitor.

On set, the 3DL2550 monitor provides plenty of information for the production staff, so we don't need to interrupt the activities of the camera operator to see what's going on. Incidentally, several of our subjects in our shoots have become 3D converts when they view just-shot scenes of themselves on the 3DL2550 monitor.

A special that we did about Broadway proved to be a really good demonstration of the respective virtues of the 3DL2550 and LH910 equipment package. We worked in several beautiful old theatres that have served as home to such productions of 'Spiderman," "Phantom of the Opera," and "Rock of Ages."

We used the larger monitor for pre-production in setting up our 3D shots, but couldn't have it running during the actual shoot since we were shooting with live audiences. (The smaller LH910s on three 3DA1s posed no distraction to the audience.) These 9-inch monitors feature a new high-brightness, high-contrast panel with the best picture quality in their class. They are especially handy in 3D production, as they incorporate some special features that provide a 2D view of various 3D checks, including composition, convergence, color and luminance, focus and zoom position, and parallax.

The LH910's display is so much larger than the 3DA1's flip-out panel that the operators obtained a better image and could make more accurate judgment calls. Our camera staff also made extensive use of the monitor's "focus-in-red" advanced focus assist and its RGB waveform monitor.

Using both of these monitors in tandem with the 3DA1 camera has allowed us to shoot swiftly and accurately. And seeing exactly what you're getting on set means that post-production is so much better, and from our point of view, that's a crucial benefit of these Panasonic production monitors.

For additional information, contact Panasonic at 877-803-8492 or visit www.panasonic.com/broadcast.