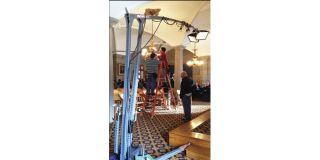 LOS ANGELES— The pilot for “Nashville,” a new ABC/Lionsgate series created by Callie Khouri and directed by R.J. Cutler, was a combination of documentary-style major performance sequences and personal moments.

It included both scenes in small dressing rooms along with major on-stage concerts at Nashville’s Grand Ole Opry Ryman Auditorium. The one constant we always had to keep in mind was that we were often shooting in buildings that, if not marked as historical landmarks, were pretty close to being that. That’s where getting lights, even camera positions, had to be carefully planned.

Fortunately, we chose the Alexa for its impeccable ability to render color and texture at extremely low light levels, and this allowed us to carry a smaller lighting package and work at light levels of less than 15 foot-candles. When we needed to work in confined areas, we used Canon C300 and other small cameras.

The Matthews Studio Equipment Max support system GOING HIGH WITHOUT FASTENERS
What really was important to our camera (and lighting) support is a tool that I almost can’t do without anymore—Matthews’ Max the “Menace” support arm. It was designed specifically for supporting gear over sets without any attachments to the walls or ceiling. At several of our shooting locations we were forbidden to make any such attachments. As we had Max, this was not a problem. We simply set it up out of the shot, attached the particular camera or light needed, and placed Max in position.

When we were shooting a political scene in the Tennessee State Capitol we were able to place our lights without touching the walls. And, we could also place a high-angle camera and remote head 27 feet up inside a vaulted ceiling.

Max is rather daunting to those who have never used it, but time and again it has easily won over the key grips who later wondered how they ever worked without it.

BIG (AND LITTLE) PAYLOAD SUPPORT
Max came to my attention during a shoot in the second season of the show. It’s designed to support a 4K lighting fixture 17 feet away from its base and this is how we initially used it. Later, we realized that by adding a 12-foot pipe to the end of the arm, we could extend our reach out to some 27 feet and attach cameras to get more interesting shots.

I’m lucky because I’ve been able to carry two Max units on the location shoots I’ve been involved in since 2008. I’ve even used these devices to support a lighting grid. In connection with another project, I hung a Panaflex camera out over a highway intersection to capture a car crash.

I’ve found the Max support system to be extremely useful when I’m using the smaller cameras such as the C300. I know it seems a bit incongruous to see something as large (yet light and maneuverable), as the Max with a small camera hanging off it. But I have to ask, how else can you get that little camera high over a large powerboat moored beside a dock?

Rodney Charters is a two-time Emmy Award-nominated director of photography. He may be contacted atrodneykiwi@mac.com.

For additional information, contact Matthews Studio Equipment at 800-237- 8263 or visitwww.msegrip.com.