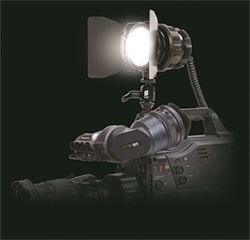 While quantum leaps in camera technology, including bang for the buck, have become the norm in the 21st century and are widely recognized, advances in support gear, such as camera lighting, have been subtler, and have been received with less fanfare. However, there is no denying that LEDs have revolutionized portable lighting in terms of Lux per pound and dollar. In terms of LEDs, Litepanels has been a key player in producing brighter, lighter, cooler lighting for production applications. They were the first to create LED sun guns and now they're first to bring to market camera-mounted LED Fresnels.

Litepanels new Sola ENG is touted as the first LED-Fresnel instrument designed specifically for on-camera applications. As with most LED fixtures, it's daylight-balanced and uses only a fraction of the power of conventional camera lights. As a result it operates much cooler than quartz-based lights.

Sola ENG Fresnels also feature instant dimming from 0 to 100 percent with no noticeable color shift, and as Fresnels, they also can focus from 10 to 70 degrees. While Sola ENGs are designed for on-camera use, they can also readily be mounted on a standard light stand. The kit also includes barn doors for additional beam focusing and shadow control.

The fixtures are designed to be fully flicker-free and their light intensity and color remain constant, even as battery voltage declines. Sola ENGs draw only 30 Watts—that's less than one-eighth the power required by the 250 Watt tungsten light which it equals in candle power. It packs incredible punch for a softball-sized light head. In the 10-degree spot mode its center beam has a maximum illumination of more than 5,800 Lux. At six feet this drops to 160 Lux. When the beam is fully diffused to 70 degrees, its maximum center beam illumination is more than 1,200 Lux. However, this drops to a bit more than 32 Lux at six feet.

The Sola ENG is very compact, measuring 4x4x5-inches, and weighs slightly less than one pound. The Fresnel lens itself is three-inches in diameter. The unit is powered via standard ENG 14.4 Volt batteries by a two-pin D tap. The fixture incorporates a low noise cooling fan.

The Sola ENG kit includes two-way barn doors, a set of three gel filters, and a ball head/shoe mount adapter. All of these components fit into a very compact, quick-draw padded black case, which can be added to other sundries in your day pack.

The Sola ENG is remarkably compact, and is comparable in diameter and mass to a softball. Its coiled power cable is hard-wired for quick deployment.

The first thing you notice about the unit is the two thick, grooved dials side by side at its back end. The first one does double duty as a power switch and dimmer. A quick turn clockwise turns the fixture on and activates a green LED. Continued rotation dims the lamp in a slow and continuous manner. The broader inner dial is a ring which focuses the beam at progressively smaller angles as the ring is turned clockwise.

Both rings are rubberized for easy handling. The power/dimmer ring is geared down to turn slowly. In contrast, the focusing ring is geared much looser to quickly adjust from spot to broad beam.

The Sola ENG comes with a short modular mounting post with a swiveling head. The latter has a quarter-inch threaded bolt for direct attachment to the Sola ENG head, which can then be locked down at any angle, from 30 to roughly 60 degrees in either direction.

There's a shoe adapter for on-camera mounting. This slides into any camera shoe receptacle and can be snugged down.

I tested the unit reviewed with two different 14 Volt power sources: a 14.8 Volt Frezzi Power Block and an Anton/Bauer 14 Volt Dionic, both using lithium ion technology. The Frezzi block is rated at 4,400 mAh and powered the Sola ENG for six to eight trials of from two to 10 minutes each, while operating at full intensity or nearly so. The Frezzi " fuel gauge" still read "full" after all of that use, and this really amazed me, as I was initially fearful of draining the compact Power Block too quickly. Obviously Sola's draw is very moderate, if not downright low.

The Sola ENG was also impressive in terms of raw illumination. I was able to use it as my sole lighting source in shooting a very dark subject outdoors at night, and at a camera-to-subject distance of 15 to 20 feet. The subject was only slightly underexposed past 12 feet. When better exposure was needed all I had to do was move in a bit closer, or add a bit of video gain. However, I was disappointed in my bid to use Sola ENG to capture crepuscular owls which managed to stay well outside of the maximum effective range of 20 to 25 feet. While I was able to see the owls well enough with my naked eye, it took 6 to 12 dB of camera video gain to get decent exposure.

Even though Sola ENG has enough power to function as a sole source in a small room, it's really designed for closer applications, and particularly for complementing existing daylight. I used it both on-camera and on a light stand as a source of key illumination, and also as a side light with good results.

The ability to change the focus, and hence the intensity of the beam, not only helps users to cope with shadows, but also to adjust the intensity of illumination hitting the subject., including the ability to diffuse it or focus intensity as needed. This provides key options for adjusting depth of field and/or color saturation and also and the amount of detail and texture in the background.

Being able to dim the unit down to five percent output or less, and also having the ability to narrow the beam and thus raise or lower the illumination on the subject is very useful. These features expand the tool kit and range of options for the creative DP, as well as the run-and-gun news or event shooter.

The barn doors and filters further enhance this incredibly compact tool kit—all of which fits into a tight, quick-draw case which seems far too small for a complete light kit.

Litepanels' Sola ENG is a breakthrough product which raises the bar another notch in the on-camera lighting world. It combines the precision and flexibility of Fresnel lighting with the daylight color temperature and coolness of LED lighting in a highly compact and featherweight package that's crammed with professional features.

My chief reservation about the unit is its case, which is primarily constructed of a medium-duty molded plastic material. While the case seems sturdy enough as delivered, it remains to be seen how well it will hold up to the rigors and abuse of daily professional use. I'll give it an "A" for design, but will award only a "B-" for long-term endurance. However, with some tweaking, the Sola ENG could well become the light of choice for pros who need cool, potent, portable field lighting which can be applied flexibly in different lighting environments and can easily be handled by a one-person band.

Carl Mrozek operates Eagle Eye Media in Buffalo, N.Y. and specializes in wildlife and outdoor subjects. His work regularly appears on the Discovery Channel, The Weather Channel, CBS, PBS and other networks. Contact him at eagleye11@gmail.com.