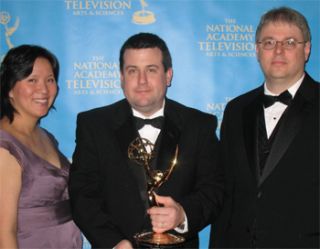 LANCASTER, PA.—Since the Commercial Advertisement Loudness Mitigation (CALM) Act was signed into law last December, the FCC has been developing specific technical guidelines to ensure CALM compliance. While the act calls for broadcasters to follow ATSC A/85 established audio loudness guidelines for DTV, these new FCC rules will have teeth, and broadcasters who fail to comply will face FCC fines among other repercussions.

Christina Carroll, Tim Carroll and Erik Booth of Linear Acoustic with the Emmy Awards for Outstanding Achievement in Engineering/Technical Development. "When consumers call the FCC, loudness is still their number one complaint. It's a very serious problem," said Tim Carroll, president and founder of Linear Acoustic. "The problem is particularly challenging because loudness is subjective and tied to artistic expression within the program, so what offends one viewer might be fine for another."

But the days of letting inconsistent audio levels slide are coming to an end, according to Carroll. "The CALM act compels the FCC to enforce rules that have been the law for over a decade, namely that the average integrated loudness of the station's audio match the dialnorm metadata parameter in their transmitted Dolby Digital (AC-3) stream. Ideally, broadcasters should correct loudness throughout their workflow to minimize the amount of correction that must be applied at transmission."

At NAB, Linear Acoustic will exhibit a full range of products, including LQ-1000 loudness monitoring and AERO.mobile for mobile DTV, all dedicated to processing and controlling television audio quality and ensuring compliance with the CALM Act.

Among the new products is AERO.calm, which includes technology for which Linear Acoustic recently won its first Emmy Award for Outstanding Achievement in Engineering and Technical Development from the National Academy of Television Arts & Sciences. The Emmy recognizes the company's development of an innovative real-time audio/metadata processor for conforming audio to the ATSC standard.

"We're improving the listening experience in the home without affecting the audio content itself," Carroll said. "Our technology accomplishes this by delivering real-time hybrid audio/metadata control of loudness and dynamic range via a more sophisticated use of the Dynamic Range Control metadata in the Dolby Digital bitstream. While DTV receivers have long had integrated circuitry for handling DRC metadata, it's never been fully utilized until now.

"The DTV receiver uses the DRC metadata, encoded in the Dolby Digital stream prior to transmission, to give viewers a choice of compressed, moderately-affected, or full dynamic range without altering the artistic integrity of the program audio," Carroll added.

Dolby Laboratories also received a Technical Emmy for their file-based processing approach. Prior to founding Linear Acoustic, Carroll worked as the product manager for the Professional Audio Division of Dolby Laboratories where he helped define and develop Dolby Digital (AC-3), Dolby E, and Dolby Surround products for HDTV and other applications.

Another DTV audio product dedicated to solving the newly regulated commercial loudness problem is the AERO.air transmission audio and loudness manager. At NAB, Linear Acoustic will show a smaller, lighter 2RU chassis, which integrates more features and functionality than its 3RU predecessor. Among the new features is the ability to insert Nielsen watermarking, as well as the traditional Nielsen codes, at the exact point in the processing chain without need for external devices.

AERO.air also features HD/SD-SDI I/O for de-embedding and re-embedding up to 16 channels of audio plus SMPTE 2020 (VANC) Metadata; UPMAX-II for more stable 5.1 upmix from a stereo source, and CrowdControl, which ensures that dialogue is preserved even in rich stereo mixes. Univision used CrowdControl during the 2010 FIFA World Cup to mitigate crowd noises during game play.

Linear Acoustic expanded their partnership with Radiant Grid, a U.K.-based developer of media workflow software by co-developing a new file-based tool called AERO.file. A subset of the RadiantGrid Platform, AERO.file is designed to process and optimize file-based audio to ensure CALM compliance early in the workflow. AERO.file can be used by ingest operators or anytime new file-based content is delivered onto cache servers.

Visitors to the booth will also be able to meet the management team, including Guy Hufford, Linear Acoutics' new director of marketing. "We have offices abroad, including London and Beijing, to provide superior service to customers in their languages and time zones," Hufferd said. "Considering how mission-critical DTV audio monitoring and processing is, we are also committed to providing highly responsive technical support to our broadcast customers worldwide."

Linear Acoustic will be in Booth #SU3326.