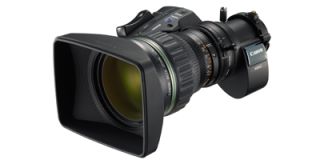 SEATTLE— While television image sensor sizes have evolved since the first electronic cameras appeared, the fairly recent “standardization” of the 2/3-inch solid-state sensor has served as the basis for a lot of lens designs.

That was until camera makers began deviating from the 2/3-inch format to 1/2-inch, 1/3-inch and 1/4-inch imagers. The smaller imagers allowed cameras to be made smaller and cheaper, and manufacturers have been able to crowd the 2,073,600 pixels necessary for a HD image capture with smaller sensors.

THROWING A CURVEBALL
The lower prices of camcorders that employ smaller image sensors have proven popular with customers, but the smaller sensors have thrown a curveball to lens makers.

“As the sensors get smaller, people expect to pay less,” said Thom Calabro, director, marketing and product development at Fujifilm’s Optical Devices Division in Wayne, N.J. “It’s the actual opposite for lenses. The smaller the sensor, the harder it is to make the lens, or the more exacting we have to be to make an acceptable lens.”

The challenge comes from the immutable laws of physics, according to Larry Thorpe, senior fellow at Canon’s Imaging Technologies & Communications Group, Professional Engineering & Solutions Division in Lake Success, N.Y. “In optical terms, we talk about optical resolution as line pairs per millimeter.” Thorpe did the math for us.

“In the case of high-definition television, if we take the version that’s 1080, that means 540 line pairs is what we’re trying to get through that glass, with as high a contrast as possible.” For the 5.4 mm height of a 2/3-inch high- definition sensor, that requires a lens capable of providing 100 line pairs per millimeter. The height of a 1/3-inch HD sensor is just 2.9 mm, which requires 183 line pairs per millimeter.

“In other words, if you want to make a 1/3-inch camera lens as good as, or equal to a 2/3-inch camera lens, the optical design has to be superior. It has to have greater capability in terms of transmission of line pairs.”

Is it possible to design and manufacture lenses that meet or exceed the specifications necessary to deliver high definition from 1/3-inch or even 1/4-inch sensor camcorders? Thorpe and Calabro agree that it’s doable, but getting budget-camcorder customers to pay for such a lens is where the difficulty lies.

“People are going to smaller formats primarily to get lower-cost cameras and lower-cost lenses,” said Thorpe. “So all of us simply had to face reality and we made our 1/3-inch lenses lower cost, and we made them less performance-capable than 2/3-inch lenses, not more.”

WIDE ANGLE
One of the capabilities cameramen love in a lens is the ability to get wide. “Wide angle lenses are tough, no matter what the size of the sensor,” said Calabro. His company actually made a wide-angle 1/3-inch zoom lens at one time, “and we discontinued it, because it was so expensive for us to make, and we were probably losing money on them.”

Thorpe noted that when shooting wide angle “you’re generally capturing a scene with a great deal more detail in it.” His advice for those who are going to shoot wide a lot is to use a 2/3-inch imaging camera.

For telephoto performance at the other end of the zoom range, cameramen like the ability to reach out with a built-in 2X tele-extender. Beyond the two f-stop decrease of light passing through the lens at any particular iris setting, a 2X extender on a lens that already has compromises can amplify errors. “Whatever errors you have in the lens, they are amplified when you throw that extender in,” said Calabro.

He pointed out that in OEM relationships with camera makers, where the camera and lens are sold as a package, “usually that price point is very low, which is why you usually see that none of those lenses that we make for those manufacturers come with extenders. That’s where a big hunk of the dollars would be.”

Thorpe explained that while camera electronics can follow the venerable Moore’s Law, where number of components in integrated circuits (such as pixels on sensors) has routinely doubled every year, “lenses are tough. They don’t obey Moore’s Law because they’re very physical.” Prices for optical glass, exotic coatings, and ever-more exacting grinding, polishing and construction are not falling.

Both Canon and Fujifilm reported that they’ve seen some customer interest in purchasing lenses above the bargain-basement level for small imager cameras. “Recently we’ve been hearing pleas from broadcasters,” recalled Thorpe. “‘Can you give us a compromise lens? Give us something that’s reasonably wide, and with a reasonably long zoom.’” In response, Canon recently developed its new 2/3- inch HJ17ex6.2B (with 2X extender), and in the 1/3-inch image format Canon had earlier developed the KT17ex4.3B, which does have a 2X extender for ENG.

Calabro said that Fujifilm developed the HTs18x4.2BERM, part of Fujinon’s Premier Series, its top-of-the-line lens class. The 1/3-inch camera lens has a 2X extender and has attracted some station group customers who want to deliver higher quality images to the 1/3-inch HD sensors.

But for the most part, 1/3-inch camera customers seem willing to live with optical compromises to hold down the price they’re paying for their lenses.