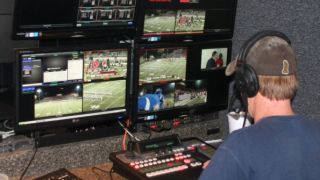 The HD production trailer, purchased through Markertek in 2010, is being used for its third season of high school football. The Granite was purchased from Omega Broadcast Group in Austin. Beyond high school sports, KXAN has also used the production trailer for town hall events, and will use it for news coverage of upcoming Formula 1 racing events.

Fluent-View provides multiviewer capabilities for the trailer’s four 20in LCD monitors. Wisland has created several customized layouts for football, basketball, and news coverage. For game coverage, Fluent Clip Store is used extensively for commercials and sponsor billboards, as well as promos and show opens. In addition, the station’s graphics department creates backgrounds and lower-third graphics, and Granite’s built-in Inscriber CG is used to add text for each contest.

On game day, a typical five-camera setup includes two high cameras and two field cameras, plus one robotic camera in the booth that is controlled through the Granite. During the game, one crew member is responsible for video replay and audio, while the second crew member handles directing, graphics and clips. With a skeleton crew in the trailer, Fluent Rapid CG 2 is a critical tool during football and basketball coverage.

The Fluent Rapid CG 2 option for Granite and Mica systems streamlines data-intensive CG graphics creation by automatically integrating databases, RSS feeds and custom actions like scorekeeping into templates. The result is customized graphics with significantly less manual effort. Fluent Rapid CG 2 also supports Daktronics scoreboards, which saves from having to set up an additional camera at most sites to shoot the scoreboard clock.