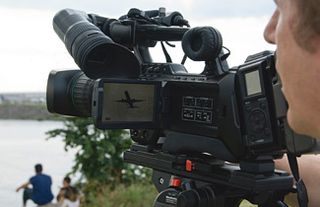 As the cost of quality television equipment drops and the quality increases, more people can afford great gear. Add to that the huge and growing number of outlets for finished video programs, and you have more shooters and editors than ever—each with his or her unique idea about optimum workflow.

JVC makes a bold statement regarding quality and workflow with its new GY-HM700U HD camcorder, which has features that many rising video producers are going to love.

The JVC GY-HM700U in use. Photo courtesy: Mary Ellen Dawley In many ways, the GY-HM700U looks like a traditional ENG camcorder, at least like most others available today. It has a camera body with a sturdy handle on top, out of which branch a shotgun mic and an eyepiece viewfinder. At the front of the camera is a removable Canon 14x lens, typical of a higher-end ENG camcorder.

The GY-HM700U sports a 4.3-inch flip-out LCD display and has something unique in a serious ENG camcorder: two SD memory slots, which is the only type of storage that comes standard with this camcorder. The unit can be docked with an optional JVC KA-MR100G SxS recorder, but you don’t need this to record video.

As for the recording format, the GY-HM700U’s standard format is 35 Mbps encoded as QuickTime. This is highly compatible with Apple’s Final Cut Pro 7 NLE software, so much so that you can edit from an SD card with Final Cut Pro. Please note that you must use “Class 6” SD cards, which have a minimum data rate of 48 Mbps.

The GY-HM700U has three 1/3-inch CCD imaging chips and can be set for all popular HD standards.

The manual states that SD cards from Panasonic, Toshiba and SanDisk are recommended, but I used a 16 GB card from Transcend and a 32 GB card from A-Data with no problems.

The largest SD memory available today is a 32 GB SDHC (Secure Digital High Capacity) card, which is what the GY-HM700U accepts. Class 6 standard 32 GB SD cards are now selling for less than $100 (the one I bought cost $65).

At its recording rate of 35 Mbps, the GY-HM700U will store about 112 minutes of video on a 32 GB SD card. With two cards installed, that’s more than 3.5 hours of recording time.

If you’re used to typical ENG cameras and their heft, you’ll be right at home with the JVC GY-HM700U. It looks and feels like a traditional ENG camera, right down to the location of controls.

I loaded two SD memory cards (the 16 GB and 32 GB cards mentioned above) into the unit and used it on a variety of shoots in varying lighting conditions. I also briefly used the camera with the optional KA-MR100G SxS recorder attached. The SxS recorder uses Sony SxS media, which is what Sony’s solid-state XDCAM uses.

One of the most challenging tests I had for the GY-HM700U was at an ethnic culture festival, where dancers in colorful outfits performed on a shaded stage, while everything else was bathed in strong direct sunlight under crystal blue skies. I was impressed that the dancers were nicely exposed, despite the camera’s seeing direct sun on parts of the stage and a bright blue sky beyond.

I did find that daytime shots in the sun required use of the camera’s built-in neutral-density filter, usually on the 1/4 setting. Without this ND filter, shots in bright daylight were overexposed. However, once I applied the filter, exposure was excellent.

I was really impressed with the contrast range on the GY-HM700U, as it is easily better than cameras that are just a little less expensive. Colors were saturated and shadows looked like shadows, but still revealed natural-looking detail.

In the evening under lights at a nearby soccer field, color and motion looked great. Inside at night with existing light, the GY-HM700U was sharp and had minimal noise with either the low or medium gain settings. Noise came up in the high (+18 dB) setting, but that was not needed for properly exposed shots in my typically lit home.

The on-camera shotgun mic did a nice job of capturing wild audio, and the GY-HM700U has both automatic and manual audio level controls.

To see what the Final Cut Pro workflow looked like, I went to Resolution Post, a well-known post-production and graphic-design house in Fairfax, Va. The guys there had heard of the GY-HM700U and were impressed at how easily video could be imported from both SD and SxS cards.

Many Mac laptops have an integrated card slot into which the SxS media fits perfectly. Once the driver was loaded, files could be read directly from the SxS card into Final Cut Pro.

The SD card was plugged into a $15 SD card reader, and then inserted into a USB port. Files from it could then be read directly by Final Cut Pro without any processing or translation.

The 35 Mbps QuickTime format that the GY-HM700U provided looked clean and clear on a Final Cut Pro editor, too. Even with lots of motion across the entire screen, we could not spot any encoding artifacts.

I want to thank Scott Stewart at Resolution Post for taking time to work with the camera and me, using the company’s Final Cut systems.

The JVC GY-HM700U is targeted directly at users of Apple’s Final Cut Pro. Not only does it simplify ingesting video in FCP, the camera’s 35 Mbps data rate is greater than that in HDV and AVCPRO standards. This results in higher-quality pictures with fewer artifacts.

If you do your post production on Final Cut Pro and are looking at cameras, you need to look at the JVC GY-HM700U.

Bob Kovacs is a broadcast engineer working on a nationwide project. He may be contacted atpvreditor@yahoo.com.