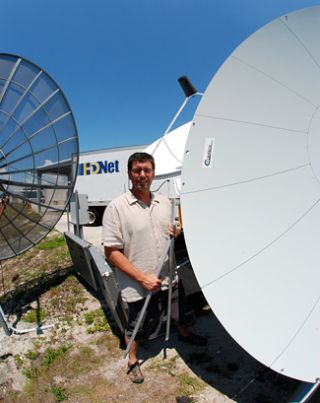 Jeff Carman
Last year, I was tasked with finding an HD RF camera system for HDNet. As our coverage of sporting and entertainment events continues to become more diverse, so does the need for a reliable wireless camera system that can deliver handheld video from locations where a cabled camera is too inconvenient, prohibited, or even dangerous.

Whether it’s roaming the pits of an auto race, providing sideline coverage of a football game, or handheld shooting among an energized concert crowd, a wireless system is really invaluable these days.

The need for a wireless camera system became evident to us last year when the rented RF system that we had been using proved unsatisfactory.

In our quest to find the best possible wireless camera system, we invited both Integrated Microwave Technologies (IMT) and another leading RF manufacturer to perform a shootout at one of last year’s Mazda Atlantic Series races being held at the Joliet Autobahn Country Club. This is a huge 3.5 mile track where coverage requires more than 55,000 feet of video cable.

Each wireless system was attached to identical cameras used by the two pit cameras, and the antennas were mounted on a JLG lift basket and raised to a height of 50 feet. Engineering, video and production personnel evaluated picture quality and frequency of breakups. We then placed both cameras in golf carts and recorded their signals into separate EVS channels for review. The test involved driving around the course while shooting, capturing scenes of both people and exotic racecars. Our maximum distance was as about one and a quarter miles from the truck (or 8,000 feet of fiber optic cable).

We then returned to review our recordings. The results were overwhelmingly in favor of IMT’s Nucomm equipment. The other system showed much more breakup, and what was worse, when breakup occurred ,it took from six to 10 seconds for the system to produce a clear picture. On the other hand, the Nucomm wireless camera system would lock up almost immediately when signal strength improved.

We chose IMT’s Nucomm CamPac2 CP2 and Newscaster DR2 wireless camera systems. We also purchased the remote camera control for the CamPac2, which provides our video operators with the ability to “shade” or “paint” the cameras wirelessly using standard Sony remote control panels.

Everyone who's seen the new system has been impressed with Nucomm’s video quality. The range we’re getting from the Nucomm gear is equally impressive.

The diagnostics available as an overlay with the Nucomm wireless camera system also provides us with so much valuable information, including battery strength, power level and individual antenna performance. This all adds up to some invaluable data when we do have to troubleshoot a problem.

We’ve been very happy with our Nucomm purchase. And I just can't wait for their new smaller body pack system, which is supposed to be slightly larger than a cigarette pack.

Jeff Carman is a technical producer and flyaway engineer. During his career, he’s covered numerous events, including hundreds of live sporting events. He may be contacted at jeffcarmen@gmail.com.