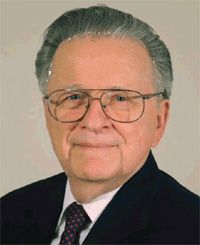 ALEXANDRIA, VA.—When Tom Keller first became a broadcast engineer, many American homes were still saving up to purchase their first black-and-white TV set to watch Milton Berle and Sid Caesar. That was nearly six decades ago, and Keller's efforts as an innovator within the broadcast industry will be recognized with the NAB Engineering Achievement Award for Television in Las Vegas, Wednesday, April 13.

Tom Keller Keller's career included overseeing NAB's science and technology department through most of the 1980s—an especially fertile period when HDTV's potential first came to the attention of the association. His direct involvement in the advancement of high-definition and subsequent creation of the ATSC is partly detailed in Joel Brinkley's 1998 book, "Defining Vision: The Battle for the future of Television."

Keller, a Lifetime Fellow of SMPTE and senior member of IEEE's Broadcast Technology Society, recently spoke with TV Technology's John Merli, who had worked with Keller when both were at NAB.

TV TECHNOLOGY: Tom, you already had quite a career prior to getting to NAB nearly 30 years ago, when you were at PBS, and at WGBH-TV in Boston, and had even worked at a huge TV complex at Walter Reed Army Medical Center. When you got to NAB in the early '80's, what was going on, if anything, as far as HDTV?
KELLER: When I first got to NAB, most people involved in HDTV were talking only about production usage or satellite distribution. No one was really aiming at terrestrial distribution, over the air, of HDTV in any respect. But the problem was the land mobile folks were aiming at those frequencies and I came in one day and said, "hey, wait a minute, we might need that for HD and the UHF band." I said maybe we should find out if we'd have interference and such.

TVT: By now we're entering the mid- and late '80's?
KELLER: Yeah, and so we set up a lab at NAB and did a pretty job of convincing the FCC that they really hadn't looked at the potential interference problems closely enough. By then we also were trying to convince people everywhere that this "HDTV thing" was maybe for real.

Eventually that's how all of us—and there were many people involved in all this, by the way—that's how we got into our over-the-air project demonstrations using the old Channel 9 tower in D.C. for the FCC and up on [Capitol Hill]. It was all a bit tricky because remember around 1987 there was no [U.S.] HD or digital system to use. So we used the NHK MUSE system they had at the time in Japan.

TVT: So how did all this morph from analog HD to DTV, which encompassed digital HD? This is around when the NAB's Eddie Fritts and John Abel first began talking up HDTV as a worthy goal for broadcasters.
KELLER: Well, remember there still was no transmission system for DTV, yet we had a lot of digital processing. But no digital on-the-air. So we had to develop a workable digital transmission system. I remember every morning for about three months [at NAB] we had a meeting with lots of people in my office and we knew we had to get serious about digital transmission because it was by now becoming increasingly obvious that HDTV in some form was here to stay.

TVT: What were your biggest hurdles once you all set your mind to devising some sort of digital transmission system that eventually became the ATSC standard?
KELLER: There were some big technical hurdles, including how to devise a system that would work in a 6 megahertz channel. That was the biggest problem. It was eventually solved by compression, of course, and that meant working very precisely on exactly what parts of the video f the picture—does the human eye really not have to see and without really knowing it. What part of video information did we not have to take in to still "see" a good picture? Bill Glenn was a very big contributor to all this.

TVT: Bill Glenn? To the rest of us that would be Dr. William Glenn, the college professor who you and John Abel went with down to visit in Florida in the late '80's, yes? That fateful trip, as you know, is pretty well captured in the Joel Brinkley book.
KELLER: Yeah, Bill was one of the very first to recognize that terrestrial [digital] broadcasting was a good idea. I wish it had developed faster because terrestrial [broadcast TV] today would be more solid that it is.

TVT: Why do you say that?
KELLER: Well, cable wouldn't have gotten such an advantage over terrestrial so early. Just imagine if 10 broadcast stations in a market each had four channels and you had that many choices to start with, would we all be paying over a hundred dollars like me for cable or [satellite] every month?

TVT: So you're saying if multicasting, per se, had really taken off sooner?
KELLER: Yeah. It should have started sooner.

TVT: Just out of curiosity, what type of HD set or sets do you have at home?
KELLER: My main one is a Sony LED, 1080p, with I think is a 47-inch screen. I'm really sold on LED. Blacks are much better, much blacker, and the video is much better. I don't use plasma because I think they tend to radiate noise if you have things like ham radio and such.

TVT: So, Tom, when you look back on fifty-seven years in the industry working on video and audio breakthroughs—and we know you've paid a lot of attention to audio over the years—what do you think of most favorably?
KELLER: That's an easy one. The people mostly. There were lots of great people I've worked with over the years. And it took an awful lot of them to do what we did.