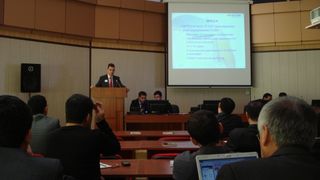 Each head-end consists of a 2.4m satellite antenna feeding several receiver/decoders. Also being integrated are network adapters to receive national television programs arriving from the Tashkent headquarters of Uzbek Telecom via a chain of terrestrial microwave links. Local sources will then be encoded and multiplexed with the national programs into a single transport stream for DVB-T transmission. Each transmission site will be equipped with two multiplexers and up to four MPEG-4 encoders. The equipment will be controlled from a network management system that will be integrated into a turnkey installation.

The first of the three head-end systems is on schedule to ship in mid-November for mid-December completion. The other two will follow in the spring of 2013.

This latest contract follows Hiltron's successful completion of approximately half the digital head-ends in Uzbekistan and is being progressed in cooperation with Rohde & Schwarz.