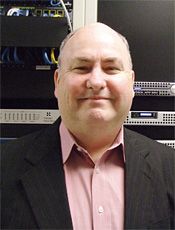 Gerald Weaver
OKLAHOMA CITY—Griffin Communications has been a long-time user of video servers from Grass Valley and has always had good experiences with them.

Server technology has certainly made our lives a bit easier. That's why the choice was clear when we decided to move to high-definition at our three Oklahoma stations last fall. We were going to a file-based environment and knew we would rely on video servers in a big way. For this migration to work, the servers had to be reliable and reduce manual processes so the staff could focus on other tasks.

As part of the conversion, we installed three Grass Valley HD K2 Media Servers (12 channels total), in a storage area network (SAN) configuration. Each SAN is fully loaded with 5.3 TB of storage capacity, which gives us ample room to store and share lots of clips and associated metadata.

Transitioning the servers was easier, as the older Profiles we had in house could easily be replaced with the newer K2 Media Servers. However, our migration project could not have been successful without the help of Grass Valley's support staff, who walked us through the transition and helped us transfer existing audio and video files from the older Profiles to the new K2 servers. Grass Valley UIMs (universal interface module) were key to that process.

In addition to the Grass Valley K2 Media servers, we've also implemented new standalone K2 Summit and K2 Solo servers to handle ingest and file conversion—in tandem with Telestream transcoding software. In our production control rooms, the servers are operated in multichannel "ChannelFlex" mode, with clip key and fill combined into one server channel and fed to new Grass Valley Kalypso production switchers that have also been installed at each station.

The K2 Media servers fit right into our new workflow, operating two control systems for playout of clips from the servers involved in newscast production—the Avid Command and the Advanced Media Protocol (AMP). The AMP specification allows the production staff to use two of the server's four channels for playout of key/fill wipe transitions and to control them directly from the Kalypso panel. This saves time and makes the staff more productive.

The same is true for controlling two K2 server channels via an Avid newsroom computer system which is used to handle news rundowns for opens. All program and commercial elements are created on Avid workstations and then converted before being sent to the K2 Summit or K2 media servers for playout to air or pre-production.

In Tulsa, newscast opens are created and stored as HD, but played out in SD via an automatic transcoding feature of the K2 server.

The K2 SAN is also used for automated playout of commercial and syndicated content at all stations.

We made our transition in order to keep our stations competitive in their respective markets. The transition was also all about delivering a better product to viewers in the most cost-effective way possible.