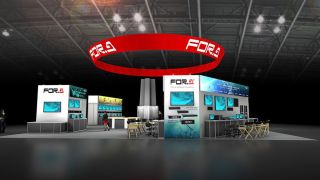 LAS VEGAS—For-A has a specific mission in mind for its time at the 2020 NAB Show, to show consumers the “world of possibilities” that its products can offer, doing so in five key areas of its booth—video system integration, 12G-SDI solutions, signal processing, IP solutions and high-speed cameras.

A For-A product set to make its debut at the NAB Show is the MFR-6100 routing switcher, which was built to support 12G-SDI infrastructures. The switcher provides single-cable transfer of 4K video and includes multiformat I/O support, auto signal detection and SNMP monitoring support. Up to 16 I/O cards can be added to configure a 144x144 matrix.

The FA-9600 multipurpose signal processor, which is designed to support live HDR broadcast productions, will also have a spot at the For-A booth. The device supports 3D LUT for advanced color grading and Sony’s SR Live workflow. Optional software can enable 4K production thanks to 12G-SDI terminals. HDR and Wide Color Gamut support and conversion of multiple formats (12G, 4K, 1080p and HD/SD) is provided.

For-A will also have its FA-505 multichannel signal processor on hand that features five inputs and outputs and has support for 4K and HDR. Both the FA-9600 and FA-505 include frame synchronizers on each input.

Another new product tapped for the NAB Show is the MV-1640IP multiviewer. The device supports up to 16 IP inputs in HD or four inputs in 4K. There’s also HDMI and SDI output options and up to 16 window display.

The rest of For-A’s slate will be filled out with its REMI IP-based remote integration system; the FT-ONE-SS4K high-frame-rate camera; the FRC-9100 frame rate converter; and some of its partner products like the Odyssey Insight video server, ClassX content creation and graphics playout system, Variant Systems Group’s Envivo Replay platform and InSync’s frame synchronizer, frame rate converter and up/down converters.