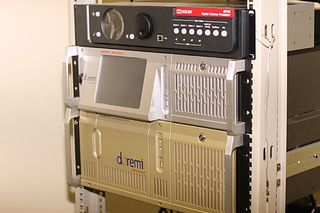 Moscow-based KP-Service was founded in 2007 with its main activity being the installation of digital equipment into cinemas, as well as the mastering and replication of digital movies. In December 2009, KP-Service began building a dedicated department for digital film mastering to offer the DCP (digital cinema package) duplication and KDM (key delivery message) generation required by DCI-compliant cinemas.

Later KP-Service divided into two separate companies - DCP24 Laboratory, which is responsible for the digital mastering work while KP-Service, the second separate company, provides services for the installation of digital equipment into cinemas.

Last September DCP24 Laboratory was approved by Paramount Pictures for DCP duplication, pre-screening and delivery via hard disc drives. The company uses the Doremi RAPID-2K mastering station and a Doremi DCP2000 cinema server. We also make use of the Doremi CineAsset software that enables us to make unencrypted DCPs for short trailers and other pre-show material.

When selecting equipment for mastering, we conducted an analysis of all available offers in the market. The analysis showed that the best for us was Doremi. One of the important factors in choosing solutions for mastering was that the Doremi RAPID-2K mastering station can grow as we do. It comes with plenty of options, which allow a user to start using it and to continue adding to its capabilities as and when new the capacity is needed. For example, we're soon going to start mastering films in the 4K format. With Doremi it is easy to do. We hope that, in the future, it will be possible to cluster several Doremi mastering stations and get better performance than is possible with each station separately.

Another reason for our choice was that we have been working with Doremi for many years. During that time we have seen the unsurpassed quality of the products, excellent after-sales service and the fault-tolerance of the equipment. Since 2007 we have installed about 60 Doremi DCP2000 servers in different cinemas and since then we have had only a few equipment failures – and most of them were related to improper operation of equipment in the theatres, and power surges that result in the failure of power supply units. Equipment failures due to poor assembly or poor-quality software in my experience have never existed.

The workflow starts with us receiving the DCDM (Digital Cinema Distribution Master) via digital delivery networks (such as Aspera or SmartJog). Then we upload the received data to the RAPID-2K mastering station. Next our engineers perform the necessary operations to encode the DCP and to prepare it for replication and transmission to movie theatres. The mastering station works perfectly with both 2D and 3D DCP achieving an average speed of 12 frames per second.

I would like to point out that all the interfaces for Doremi are very friendly. The first time we saw them we were amazed by the large number of options and switches, but after working only a few days everything became obvious. Once the DCP package is ready, it is transmitted over the LAN directly to the player DCP2000 server installed in the screening room. There our engineers, together with representatives of the customer, review the movie and approve it for duplicating and shipping. This is a fairly simple process that involves coordinating the work of the two main servers, both from Doremi – for mastering and playback.

Thanks to the complete and scalable solutions from Doremi we were able to build one of the best digital mastering labs in Russia. This has allowed us, in only the second half of 2010, to prepare more than 20 digital releases and grow our market share from zero to 25 percent of the Russian market. Of course, this is the result of hard work by the lab staff, but it is also important to know that the Doremi equipment is also working well for us.

DCP24 is also the founder of the “Russian United Digital Cinema Database” – the united database for all Russian integrators, distributors and digital cinema vendors. The database contains live information about the Russian digital cinema market and it includes all certificated cinemas with the contact information for each digital screen in Russia and the former Soviet Union. This shows that the total number of screens doubled during 2010 and now stands at 950 – just over half of the modern screens in Russia.