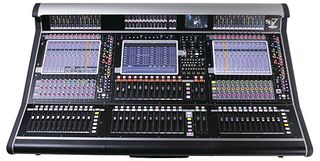 The work surface handles up to 996 simultaneous optical signals, 224 MADI, and 24 analogue and AES/EBU connections on a single SD7B system.It also has 128 busses, each with full processing in mono, stereo, LCR or 5.1, as well as 32 matrix busses and graphic equalizers.Two next-generation Tiger SHARC® chips provide high-quality reverbs and effects, and two redundant, hot-swappable processing engines are included as a standard feature.

The DiGiCo SD11B and SD10-24B offer an array of similar features in a more compact console.Also new this year are: SD-Nano and SD-Mini remote racks, UB MADI interface, and the Purple Box optical converter, which extends the possible distance beyond the reach of a standard coaxial MADI or CAT5E connection.