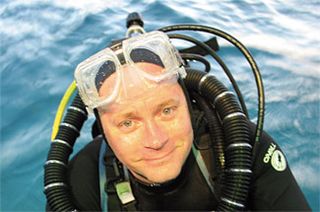 Jonathan Bird
BOSTON
Between dives and broadcast, there's a lot that goes into creating "Jonathan Bird's Blue World," my series on public television.

I'll admit to being a nerd going way back, and still don't understand why I had to take PhysEd in college to complete a degree in electrical engineering. But I'm glad I did, because I found a hobby in scuba diving, paired it with a longtime love for photography, and discovered my true calling as an underwater cinematographer.

Countless TV specials, films, books and awards later, here I am hosting and directing the third season of my family underwater adventure program.

Underwater videography is a tricky specialty. Natural light underwater is extremely blue—there are hardly any red wavelengths in it—so you need to light scenes properly to get a good looking shot. I'm now a firm believer in the ultra-bright LED-based lighting devices which have become available.

In creating my "Blue World" programs, I shoot with a variety of HDV cameras—from Sony's compact HVR-A1U to Canon's XH A1. The editing process begins with a Sony HDV deck for capture. I do the voiceovers, and the whole show is edited in Final Cut Pro on a Mac Pro.

And this has made me a firm believer in another product too—Blackmagic Design's DeckLink Studio. I look to this as the heart of my editing system, from real-time high-definition monitoring during the edit to preparing broadcast-quality tape output for delivery of the masters to the distributor.

When I bought the DeckLink Studio, I just dropped the card into my Mac, hooked it up to a 42-inch Samsung monitor and powered things up. I was amazed, simply because it worked right out of the box, something that doesn't always happen in this day and age of computer add-ons. I was looking at footage in 1080p in real time as I edited, knowing that HD quality would be what the audience would see in the final product.

Real-time downconversion is another really cool feature of the DeckLink Studio. In past experiences with other equipment and software, I've found it usually doesn't look good. However, with the Blackmagic card, everything looks exceedingly clean, like you shot in really good SD.

But the DeckLink Studio really shone when it came time to put two seasons of the show onto tape for an international distributor. The first season had been shot in standard definition, and the second season was in high definition. I had to deliver 12 tapes—half in HD and half in SD—to the distributor. I rented a Digital Betacam deck for SD and an HDCAM deck for HD, and was expecting days of frustration in getting it all to work. But with just SDI and a RS-422 cable, I put 12 half-hour episodes out to tape in one afternoon—in one pass—without a single glitch.

I'm lucky to have the creative freedom to do what I love, and products like Blackmagic Design's DeckLink Studio to help me. For the money, it's the greatest piece of video gear I've ever owned. It just works.

Jonathan Bird is a photographer, speaker, president of the non-profit Oceanic Research Group in Boston and an Emmy Award-winning underwater cinematographer and producer. He may be contacted atjb@jonathanbird.net.

For additional information, contact Blackmagic Design at 408-954-0500 or visitwww.blackmagic-design.com.