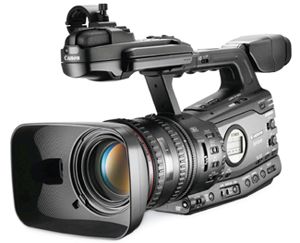 The Canon XF305 HD Camcorder
While the other major camera manufacturers have produced HD camcorders in the $5,000 to $8,000 price range, Canon has held back until now, presumably to join the game in a later stage of evolution. Between recording media and compression codecs, there has been rapid change in recent years and Canon’s XF305 is the latest attempt to get it right.

The Canon XF305 is built on two elements in HD acquisition technology that have advanced dramatically: memory card media and compression codecs. To that end, the Canon XF305 uses inexpensive CompactFlash cards for HD capture, and employs Canon’s own version of MPEG-2 4:2:2 long GOP compression.

The Canon XF305 offers three choices of bit-rate, 50, 35 and 25 Mbps, as well as several frame rates to provide the user with more choices. The camera shoots true 24p, in addition to 60i, 60p (in 720 mode) and 30p. The frame rate is an aesthetic choice, with 24p providing a more film-like look. The bit-rate determines how much recording time you can get on the CF cards, with some sacrifice in quality at the lower rates. You can also select different frame sizes: 1920x1080 or 1280x720.

There are numerous other features of interest to the professional videographer, and almost all of them are carefully placed for easy activation. There’s a built-in waveform monitor and vectorscope, and also a three-stage ND filter. The camcorder has physical switches for auto focus, auto iris, manual zoom, shutter control, ND filter, gain and white balance. As most of these are physical switches, it’s easy to see what the settings are and quickly make changes when desired.

The menu offers extensive control over image factors such as gamma, pedestal, knee, saturation, sharpness and color matrix. The camera ships with several pre-sets, one for normal shooting and two for a deeper film-like look. You can also create your own settings.

By sliding the main switch from “camera” to “media,” you have access to all of the recorded clips and instantaneous playback. In addition to viewing clips in this mode, you can mark, copy or delete clips and view all of the technical clip information including length and timecode.

The Canon XF305 is equipped with an HD/SD SDI output, genlock input, and timecode input/output. These features differentiate it from its slightly less expensive brother, the Canon XF300. It also has output terminals for HDMI, HD/SD component and SD composite video.

And, of course, the Canon XF305 has full professional audio capability (two channels: linear PCM, 16-bit, 48 KHz), with two XLR inputs and an onboard stereo microphone.

The first thing I noticed when picking up the Canon XF305 is that it is ergonomically well designed. It balances well when handheld, and has all of the essential camera controls within easy reach. The LCD screen flips out from under the top handle and can be placed on either the left or right side of the camera. A “mirror” switch allows you to point the camera towards yourself and reverse the image on the LCD screen, which is handy for news reporters.

A full set of menu and playback controls is placed on top of the handle, which makes it very easy to access and view clips. Zoom and on-off controls are also placed here as well as on the side hand grip. There’s also an eyepiece viewfinder in addition to the LCD screen.

I found the camera simple to use, partially because so many controls are physical switches or buttons on the outside of the camera. Setting critical recording functions is done through the menu. I did find the resolution and frame rate oddly buried in the menu list, and it seemed that something this important should be right at the top. Nonetheless, once I found them, setup was easy. I like to shoot at 24 frames per second, as I’ve found this eliminates some of the sterile clarity of video; I was happy to find that the Canon XF305 shoots in true 24p. After setting up that frame rate, I set the bit-rate and resolution to 50 Mbps with a 1920x1080 frame size.

It was then time to put the camera through various paces. For starters, I shot segments of an outdoor music concert, testing to see if there are any problems with long shot length, as some of my shots ran up to 15 minutes. The camera is designed to record shots of unlimited length. While this is technically possible, I think it’s wise to break shots into shorter segments. That way, if there’s ever a file error, you won’t lose a large segment of footage. In one instance, the camera displayed a message saying that the clip contained an error; however, it offered a recovery option and this error was successfully repaired. Be sure to use cards that Canon has approved to prevent such occurrences. A list of compatible cards is posted on Canon’s Website.

The LCD screen performed very well, even in bright daylight. I also liked the information display. It tells you everything you need to know, and includes a compact light meter, color temperature, sound meter, and provides the current settings for resolution, focus, gain, f-stop and shutter speed. The information is arranged so that it doesn’t obscure the image. The zoom range is also very impressive, and I found the optical image stabilizer to be of superior quality. It produced steady images even when I handheld the camera with the lens fully zoomed in.

I found the difference in sharpness and overall image quality between the 50 and 35 Mbps bit-rates to be barely perceptible. However, I did notice a visible drop in image quality between clips recorded at 50 and 25 Mbps. Although, given the difference in bit-rate, I found the drop in quality to be less than I’d expected. I didn’t notice any perceptible difference in color between any of the bit-rate settings. Unless memory card space is a factor, I would recommend shooting at 50 Mbps. In some cases, if you’re shooting specifically for Webcast purposes, the 25 Mbps makes more sense, as it reduces file size. Basically, it’s nice that the Canon XF305 offers these choices so that you can choose a bit-rate suitable for the destination.

In terms of editing, it’s a simple matter of removing the CF card from the camera and plugging it into a card reader. You can also transfer media directly into the editing system from the Canon XF305. Avid 5.0 readily accepts the media files, and Final Cut Pro will, after installing a plug-in provided with the camera. When importing files into Final Cut Pro, the user is offered the choice of transcoding to an Apple ProRes 422 codec or working with the files natively.

In terms of overall image quality, the Canon XF305 produces a very sharp image with rich colors. The image can be modified for one’s personal preferences by using the custom settings, and the two cine presets provide a good starting point. The detail and image quality appear on par with footage shot on other camcorders using a 100 Mbps data rate.

Canon is famous for their lenses, and they have built an exceptionally sharp and fast one for the XF305. The f-1.6 to f-2.8 lens lets in a lot of light and provides a manual focus ring with true distance numbers on it to allow more professional and critical focusing.

The Canon XF305 is a very cost-effective HD camcorder that’s elegantly designed, exceeding the feature set offered on other similarly priced models on the market. It also offers distinct advantages, such as the ability to record on low cost CF cards, and provides a choice of three bit-rates. Other plusses are a superior lens, extensive features, and outstanding ergonomic design. This is a very durable and versatile camera that provides excellent image quality at a competitive price. Canon has studied the market well and produced a feature rich camera at the top of its class.

Geoff Poister, Ph.D., is a member of the Film and Television faculty at Boston University and a regular contributor to TV Technology.