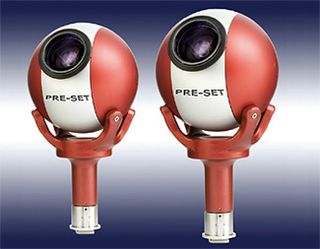 The 4K digital cinematography threshold will be crossed by several more camera makers at the 2012 NAB Show, along with advancements in a number of other areas of camera design and performance.

3ality Technica will debut IntelleCal, a self-calibrating geometry harmonizer that automatically aligns two cameras on a 3D system at the push of a button, enabling fast and precise setup without human intervention. Also new is IntelleCam, which automatically manages S3D to provide comfortable stereo in a live shooting environment. The company will also show accessories for the Sony PMW-F3.

Canon EOS C300
ARRI will showcase its Alexa range of 2K cameras, the Alexa, Alexa Plus, Alexa M, and Alexa Studio, which boasts 14 stops of dynamic range, a base sensitivity of EI 800 and cinematic image quality. Their ergonomics, menu systems and functionality are based on film cameras to provide ease of use for experienced film professionals.

Grass Valley will return with its LDK line of cameras and will introduce the LDK 4427 3G Fiber Camera to 3G Triax Converter, which allows users producing programs in resolutions up to 1080p50/60 to send their signals across any type of cable infrastructure. The LDK 4427 performs a 1-to-1 conversion of a 3G fiber camera signal to a 3G triax signal. Ancillary data—such as return video, control, and intercom—are also converted on a 1-to-1 basis.

I-Movix X10 Live Ultra Motion SystemI-Movix will show off their brand-new X10 system, touted as the industry's first live ultra motion solution to deliver real-time continuous extreme slow motion in full HD at 300 fps (or 600 fps in 720p). The camera system was developed in partnership with EVS, with the X10 system used with an EVS XT3 production server under LSM control. The company compares it with existing continuous super-slow motion systems that are restricted to three times slower than real ime.

Indiecam GmbH will present its IndieGS2K, a miniature CMOS global shutter camera incorporating a high-grade 2/3-inch CMOS imager to deliver up to 60 frames of 2K footage in 10-bit uncompressed and 12-bit RAW. The high image quality is obtained by utilizing an Instant-RAW workflow that delivers 12bit Cinema DNG files. The camera has a C-mount with adjustable back-focus that allows the choice of a wide range of high-resolution lenses. IndieGS2k is designed to be well suited for 3D and other multicamera applications.

Ikegami Electronics (USA) will present the HDK-97C, a new 3G field production camera employing next generation CMOS sensors. This multiformat camera supports not only 1080i/720p, but also 3G signals such as 1080/60p 4:2:2 and 1080/30p 4:4:4. The HDK-97C is a compact low-profile docking-style camera. Also new from Ikegami are the HDK-97A and HDK-55 Unicam HD Cameras. The HDK-97A is a new 3G multiformat production camera. The HDK-55 is 1080i. Both are compact low-profile docking cameras.

JVC Professional Products will introduce its GY-HM150 compact handheld three-CCD camcorder, based on the ergonomic design of the company's popular GY-HM100. The new camcorder features a new encoder for improved HD recordings and to add support for standard definition (SD). The company will also mark the NAB debut of its GY-HMQ10U 4K compact handheld camcorder, capable of capturing and recording real-time video at four times the resolution of full HD—3840x2160 images at 24p, 50p, and 60p. It employs an f2.8 10x zoom lens specifically designed for 4K imaging.