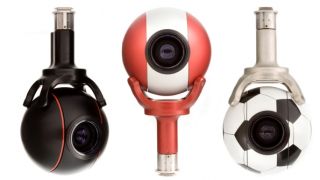 Nearly 50 Camera Corps Q-Ball heads were recently installed for a single show shot on location at a large production site in southern England. The nature of the program demanded maximum secrecy to ensure the greatest possible dramatic effect and to prevent participants obtaining prior knowledge of the challenges they are likely to face.

All of the Q-Ball cameras were operated by a four-strong Camera Corps team, each using a joystick-based guidance system plus a remote control panel to ensure accurate colour matching. These allowed the action to be tracked over widely dispersed locations without a correspondingly huge production staff. Setup, recording and dismantling were all completed on schedule within an eight-day timeframe. Camera Corps' 'SIMPLY SMPTE' hybrid electro-optical links carried HD-SDI data from many of the Q-Ball heads over long distances back to the main control room. Control data was fed forward along the same links.

Further afield, over 50 cameras are currently being installed for a reality show in an environment that pushes contestants, production crews and their equipment to the limit. Q-Ball's controllable-acceleration pan and tilt motors allow the show's participants to be tracked while in motion rather than the operators being limited to adjusting the angle between shots. The cameras can be used in practically any lighting conditions, including infrared illumination if required.

This installation will also include 24 Camera Corps MiniShot remote pan/tilt heads. These and the Q-Ball systems will be operated under joystick control via four multicamera control units, allowing color matching as well as shooting angle, zoom and focus to be adjusted in the technical operations room. Toshiba IK-HD1 3-CCD cameras with wide-angle optics will deliver action shots from relatively confined spaces.