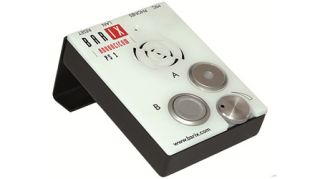 The Annuncicom PS1, which doubles as an IP paging and intercom device, has a simple, compact design ideal for fast-paced video production environments.A push-to-talk button allows technical directors to facilitate camera movements and communicate with production personnel while remaining mobile.Cameramen can mount a belt clip to the back of the device for on-cable attachments. Power over Ethernet (PoE) capability allows production personnel to move freely around the studio using a single-wire, high-bandwidth IP connection.

Barix will also introduce the Exstreamer 105, its latest-generation IP audio decoding device for radio broadcast.It retains all the features of its predecessor, Exstreamer 100, while adding a MicroSD slot to the front panel for a sleeker design and enhanced content protection.This is particularly useful in broadcast operations where the device is streaming content direct-to-air, including small studios, unmanned operations, and in-store networks.