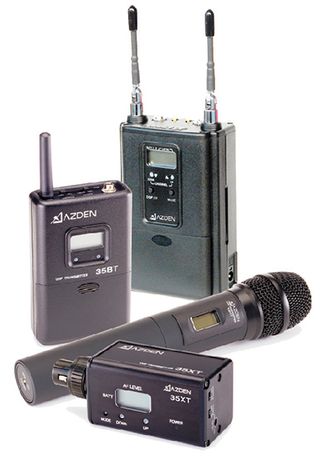 The Azden 330 wireless system FRESNO, CALIF.—This past January, I decided to stow my traditional video cameras and move into the world of DSLR video. I invested in a new state-of-the-art camera, thinking that with the rest of the gear I owned this would be all I needed to start shooting. I quickly learned differently— these camera bodies don’t include the built-in sound pickup quality that’s needed for professional projects. I realized that I had to gear up to fit my audio recording capability to the challenging jobs looming on the horizon

My first move was to contact the folks at Azden, as years ago I acquired some Azden wireless gear and it’s never let me down. I received some valuable advice from the company and acquired their 330LT wireless system and SGM-3416L shotgun mic. I also picked up their cool FMX-DSLR mixer.

The 330LT system consists of two 35BT bodypacks (transmitters) with EX-503L lapel mics and a 330UPR stereo receiver. I experimented with the new gear by hooking up the mics on each side of my shirt (left and right) and connecting the receiver to my Nikon D4’s shoe mount. I also ran tests with a Nikon 7000—a camera with far more limited audio controls. The results were elegant in both cases.

TESTING, TESTING…
I walked around my studio and opened my noisy double doors. (That served as an efficient way to test the left/right stereo effect.} I found the audio range on this 330LT system to be phenomenal.

I played back the recording through my ear buds and when I heard the doors open and close, I actually turned around to see who came in. When I say that the sound recording was so vivid and alive I’m really doing it a horrible injustice. It was unbelievably amazing.

A SHOTGUN MIC, TOO
I was now in excellent shape for mic’ing up my seminar presenters, but what about my other needs? This is where Azden’s SGM-3416L shotgun mic comes in. I normally shoot events alone and it’s not uncommon for me to have three video cameras recording while I’m shooting stills. Later in postproduction I marry all the sound sources together to produce a refined main audio source mix seasoned with ambient sound when desired. I often use my SGM-3416L on a boom mounted on a light stand with a grip head and boom bracket for my main subject. I put my lapel mics elsewhere in the room. This gives me this all-encompassing array of sound that grabs everything, and it’s very clean.

Also, when I’m on a job, I either use different DSLRs to grab the sound from my Azden mic sources, or opt for Azden’s very affordable and handy FMX-DSLR audio mixer, patching everything into the unit, which is connected with a stereo audio cable to my camera.

This entire DSLR conversion has really been a new adventure in creative video production. I’m really enjoying the clips I produce with my new gear, and so do my clients. When it comes to dependability and audio quality, Azden products are providing me with a sound we all like to hear.

Marc Blake is a professional photographer and video producer. He may be contacted atm@marcblake.com. For additional information, contact Azden Corp. at 516-328-7500 or visitwww.azdencorp.com.