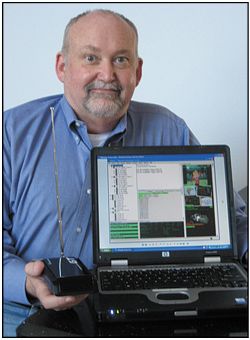 COLLEGE STATION, TEXAS
Transport stream analysis is something of a mystery, and has been a fascination of mine since I built my first DTV technical plant in 2003. A necessary piece of test gear is a stream analysis package. I purchased a self-contained unit then at a cost of more than $10,000. There wasn't much to choose from. Mine was considered portable, only because it was packaged in a road-worthy case with a handle.

Thanks to a TV Technology article by Doug Lung, in 2005 I discovered a software application called "TSReader" by Rod Hewitt. With the TSReader application and a B2C2 ATSC tuner card used for DTV datacast system monitoring, my desktop PC became a basic transport stream analysis system. I used this at home, and the study of local DTV transport streams became an interesting pastime.

Wayne Pecena is all set for stream monitoring with AutumnWave's StreamSleuth-GT package and his notebook PC. In the last couple of years, USB-powered ATSC tuner devices have become popular. As such a device provides DTV reception on a notebook PC, I could now travel with a truly portable battery-powered DTV monitoring system. I thought it would be great if TSReader could be interfaced with this type of setup.

AutumnWave now provides this package with their StreamSleuth-GT. It includes an OnAir GT USB-based ATSC tuner module bundled with the professional version of TSReader. The "professional" version of the software provides features and capabilities that rival counterparts in the marketplace costing several thousand dollars more.

Installation of the hardware and software was straightforward on my notebook PC. The OnAir GT package includes a tuner module that tunes 8-VSB, analog and QAM; a DTV viewing application; recording scheduler; virtual desktop control GUI and a remote control. I've found the performance of the tuner is equal to or better than several other USB tuner devices available. TSReader Professional provides expected transport stream monitoring functions, as well as the ability to record a stream for later playback analysis. One of my primary uses is for studying and monitoring my stations' transport stream. The bandwidth utilization of each PID, PSIP electronic program guide information, stream errors, null packets and closed caption display is utilized most frequently. I am just beginning to scratch the surface in discovering the capabilities. I find the home environment less hectic and more productive for studying and gaining a full understanding of DTV transport streams. I'm also intrigued with monitoring other station's transport streams.

Wayne M. Pecena is the director of engineering for public broadcast stations KAMU-TV/FM at Texas A&M University. He has more than 35 years of broadcast engineering experience and is a Certified Professional Broadcaster. He may be contacted at w-pecena@tamu.edu.

For additional information, contact Autumn Wave at 717-715-0567 or visitwww.autumnwave.com.