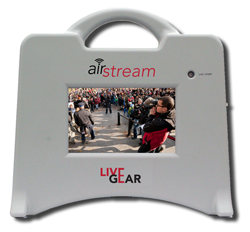 VISLINK announced that it would be showing its AirStream Internet newsgathering (ING) transmitter at this year’s NAB. The transmitter provides high-quality live HD/SD video and audio transmission from anywhere there is cellular broadband service. The multi-mode 3G/4G LTE video broadcast transmission system can operate continuously up to six hours with hot-swappable, rechargeable batteries.

The AirStream transmits to the company’s LiveGear LGR-1000 receiver unit, which can receive up to six transmissions are simultaneously. The receiver, which can also receive up to four bonded up to four bonded cellular network IP streams carrying a packetized segment of the video transmission from each remote AirStream transmitter, aggregates the four bonded data channels into an HD-SDI video stream at the studio for retransmission or playout to Web-based subscribers using the video media server.