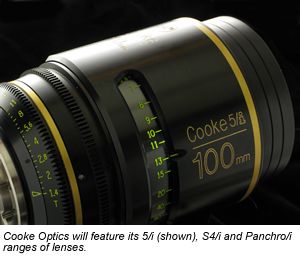 Cooke Optics will bring lenses from its S4/i, Panchro/i and 5/i ranges to IBC2012, including a prototype of a 65mm lens for the Panchro range. The company also continues to expand its production capacity with more new hires at its Leicester factory to meet increased global demand for PL glass.

Recent high-profile projects that have been shot with Cooke lenses include the Emmy Award-winning television series “The Borgias” and M. Night Shyamalan’s forthcoming feature “After Earth,” which is the first feature film to be shot on the Sony F65 camera.