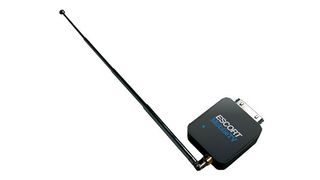 Two companies, Escort and Siano, have joined forces to create a new product that is essentially a digital television receiver designed for iPod, iPhone and iPad users. It was shown at CES 2013 and has several features, including the most prominent, the perky blue Dyle logo, meaning it's being branded to consumers as a live television device. Dyle is a multi company consortium branding mobile TV products, and this one being one of the newer ones to work with iPods, iPhones and iPads, could be a compelling option.

Like similar devices, the unit plugs into the iOS device and sports an extending TV antenna. I am still unsure with all the compelling technology why we are still using antennas from decades ago, but they must work, so I’ll stop complaining. Actually one legitimate complaint I would have is the port is not the new Apple Lightening connector, but the older style 30-pin connector. Where you are in the Apple technological system is going to matter on how appealing this device is. If you are a hard-core Apple fan always in line at 6am, then chances are this device will work with nothing you have now, including the iPhone 5, the iPad mini, current-generation iPod touch and iPad with Retina display. But if you are a year or more behind, and have Apple devices with the 30-pin connector, you’ll be able to snap this baby right in. In fact the device may breath new life into an older iOS Apple product you may have.

The device runs via the free iDTV USA app available in the Apple App store and gives the consumer access to 90 live TV stations in 35 markets. The unit is rechargeable, and — aside from the whopping big antenna — is fairly lightweight and compact. Like most Dyle devices of this type, the compelling feature is that you don’t have to use your data plan at all. No wireless data, no Wi-Fi, no LTE, nada. It’s all free and OTA, the way TV was invented. And, unfortunately, also like many Dyle products, there is no way to record or playback shows. No DVR functionality is included, and it sure would be nice given the beefy storage that iOS devices have these days. But if you are looking to catch that certain game, or soap, or series, or just about anything else airing locally, the Escort MobileTV can grab it for you.

The price point is a reasonable $100 and there is a coverage map available on the Escort website so you can pinpoint what networks are available free in your area. Consumer acceptance will be on par with similar Dyle products; it will be interesting to see how much of a demand there is. One drawback with some of these Dyle devices is that since development time ramps up slowly, when it came time to release, many supported only the old-style Apple connector. Having a new device, with the new connector, for new Apple iPhones, iPods and iPads would have been ultimately more compelling. However there are still millions of devices out there with the older 30-pin connector, so the market is there. But the connector could not even be part of the story, the real item is if consumers want to watch live TV on their Apple devices. This year could be make or break for Dyle devices, but if you want to get into broadcast TV on Apple units, Escort MobileTV makes it easy.