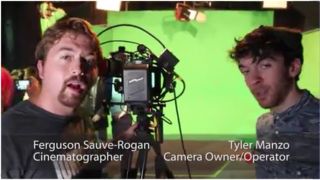 los angeles, DECEMBER 2, 2013—When faced with the task of recreating writer/director Kanen Flowers’ cyber-punk superhero world on screen for the upcoming all-digital indie film Hero Punk, DP/Cinematographer Ferguson Sauve-Rogan knew he would need a lot of peripherals to power up his rig. That’s why Rogan relies on portable power solutions from Anton/Bauer®, part of Vitec Videocom, a Vitec Group company and a premier global provider of batteries, chargers and other mobile power systems for the professional broadcast, video, film and healthcare technology industries.

Hero Punk, a soon-to-be released independent feature film from Flowers (produced by Scruffy.TV), is a futuristic sci-fi thriller that takes place in the year 2042 and tells the story of a dystopian society in which authorities look to eliminate people with mutant powers. More than half of the film is being shot on a 1,100 sq. ft. green screen and the director heavily relies on post-production VFX tools to bring the complex digital world to life. During filming, Rogan selected several Anton/Bauer DIONIC®90 batteries, as well as a fewGold Mount® solutions, to power the three monitors and Zacuto Z-Finder EVF that accompany the Blackmagic Design Cinema Camera he is using for production. Rogan’s kit also includes RED EPIC cameras, Canon DSLRs and 35 mm film.

“Sure, we could run cable, but there are so many already in the studio that I don’t want to add the cable clutter on the floor,” says Rogan. “I have recently been finding myself shooting more on the Blackmagic Digital Cinema Camera, which has an internal battery that can’t be removed. Since it has a shorter life span than what I require, this forces me to go after a more professional battery solution. On Hero Punk, the Anton/Bauer DIONIC 90batteries allow me to power a ridiculous amount of accessories on my camera so that the director and his staff can have a video village.”

Rogan first discovered the Anton/Bauer solution several months prior to production while working on another on-going project Our Happy Apocalypse (OHA), a sci-fi web series. On that set, his crew shoots in some remote locations where it is often difficult to find power. This mandates that the crew bring along its own reliable power sources for the cameras and lights.

“Believe it or not, I only bring two DIONIC 90’s with me when I shoot somewhere on location for OHA; they last us all day,” says Rogan. “I have yet to kill a battery. I just change them casually at lunch time. I can supply all of my gear with what I need, and I don’t panic about not being near a wall charger. Plus, since I’m now free to move about, I can keep the camera package small and portable, so we can move several times in one day.”

“We’re going to have many more crazy back-to-back travel days coming up for OHA and the Anton/Bauer solution is going to save me a huge headache. Long-lasting and portability were two big perks that really allowed me to realize the power and benefits of the brand.”

Anton/Bauer designed its DIONIC 90 so that it would deliver consistently reliable performance even in the most challenging, fast-paced shooting environments. It offers a RealTime® display that continually updates the operator on remaining run-time and the state of the current charge. Weighing only 1.8 pounds, the DIONIC 90 can be transported without restrictions under the IATA and DOT safety regulations. The 95Wh battery can handle a maximum load of six amps, and offers run times ranging from six hours at 15 watts to 1.75 hours at 50 watts.

“I never used to pay too much attention to my power solution,” adds Rogan. “But then I began to notice that my RED EPIC kits usually came with V-mounts when I rented them. I found myself constantly getting annoyed when they would get loose. On all the broadcast work I’ve done, we’ve always had Anton/Bauer on the back with the company’s Gold Mount, and it just feels more solid. It doesn’t move at all while we’re operating. I started requesting Gold Mounts and DIONIC 90’s almost a year ago and I’ve been a fan ever since. When it comes to power, you really can’t cut corners. It needs to be top notch because if your camera dies, productions, such as Hero Punk and Our Happy Apocalypse, will come to a grinding halt.”

Anton/Bauer is recognized as the world’s innovator and a premier provider of batteries, chargers,and other key mobile power systems for the professional broadcast, video and film and healthcare technology industries. Based in the United States in Shelton, CT with offices in Europe and Asia, Anton/Bauer was established in 1970 and has expanded its product offerings to include many signature lines such as its leading Gold Spectrum™ Series, Gold Mount® system, InterActive® chargers and Logic Series® batteries such as the HyTRON® 50, 100 and 140, and DIONIC® 90, HD, HC and HCX. Their products are compatible with every camera brand on the market today. Other Anton/Bauer high performance products include the CINE VCLX and the Tandem 150 Modular Charging System. Their superior-quality products have become an industry standard. For more information on Anton/Bauer, visit www.antonbauer.com.

Vitec Videocom brings together some of the most respected, most innovative and most sought-after brands in the industry: Anton/Bauer, Autoscript, Camera Corps, Litepanels, OConnor, Petrol Bags, Sachtler, Teradek, Vinten and Vinten Radamec. It acts as an endorsing brand for these market-leading broadcast, film and pro video products, encouraging multi-brand system sales and simplifying the way that customers worldwide do business.

Vitec Videocom – advancing the quality and science of media production.