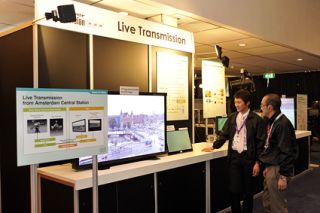 While stereo 3D continues to make headlines with a new kit appearing on almost a daily basis, the research and development of 4K technologies appears to be on an equally fast track. 4K represents another leap toward higher-resolution digital imaging and denotes four times the amount of picture information than 2K, which is itself twice the resolution of HD. The filmmaker’s, if not yet the consumer’s, appetite for higher-fidelity images is driving the industry toward 4K tools. That’s notwithstanding the fact that the human eye would find it difficult to take in all details at resolutions beyond 4K.

4K is not particularly new since it is widely acknowledged that Dalsa invented the first professional system a few years ago. Expensive to hire and arguably ahead of its time, Dalsa cancelled development of the Origin in 2009. Now 4K is on the agenda of all the major camera manufacturers who have plans for product based on unique compression systems. However, it pays to take the hyperbole associated with digital imaging with a pinch of salt. Some vendors are claiming to have innovated technologies capable of resolutions as high as 8K; others claim they can produce twin 4K images for stereo recording; while others already have 4K or 5K cameras, which are being used in earnest by A-list directors.

Measuring the quality of digital imaging systems is to a large extent subjective and dependent on the skill of the cinematographer to bring out the best in the technology. Manufacturers have struggled to attain the qualities in exposure, dynamic range and overall “look” of 35mm film, which is nominally supposed to equate to a digital pixel count of 2K. Certainly the promotion of a camera’s ability based purely on a sensor’s horizontal pixel count can be misleading. Virtually all of the 4K systems in development are based on bayer pattern sensors, which inevitably leads to some reduction in resolution during the debayering process.

Moreover the ergonomics of the camera’s bodywork, its ability to work with prime lenses (many of which are rated at 8K or more of light coming through the glass) and the elegance of handling the large volume of data on-set and into post are all considerations for the cinematographer. A 4K picture is, in most people’s opinion, a far richer, more nuanced and detailed experience than 2K, yet the business case is far from transparent.

The bandwidth required to transmit it to homes is light years away; there is only one cinema projection system capable of supporting the format and the sheer volume of data would buckle the budgets if not the equipment within post-production facilities.

“Studios don’t want projects delivered in 4K,” explains Leandro Marini, founder of digital intermediate specialist Local Hero Post. “We should be moving to 4K as an industry — it is the future of film — but most of the infrastructure is solidly 2K and it’s not that easy to switch into 4K.”

The chief bottleneck lies in the rendering of VFX images at 4K, which requires more disc space, more time and more expense. Ironically it is much easier to perform a 4K finish on a romantic comedy than on a VFX heavy film. Part of the answer lies in building out support for 4K recording, storage and post-production tools to permit a 4K workflow from acquisition to master. Some of this is being delivered with tools including high-capacity solid state media, monitors and 4K-capable capture cards coming to market.

Manufacturers argue that recording 4K is not just about delivering in 4K today, but about capturing content at a higher resolution with benefits in dynamic range, colorimetry and latitude to 2K or HD images derived from it. In that sense it is similar to the approach broadcasters took when capturing at HD for an SD-only deliverable. Perhaps the most advanced format for next-generation TV broadcasting is the NHK-backed Super Hi-Vision, which posts an 8K resolution (7680 x 4320 pixels), sixteen times higher than full HD, but this has a tentative first satellite broadcast deadline of 2020. We will doubtless see further advances in 4K technologies at IBC2011 because, despite question marks over the business model today, it will likely become more prevalent, perhaps even the defacto standard given time, as new tools and accessories facilitate smoother and cheaper production.