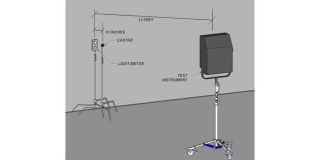 Recently, I was browsing through some lighting manufacturer’s data sheets for a group of “TV Softlights.” In the data sheets, a value for “Shadow Factor” was given for each instrument. I was quite amazed at this reference as I had never seen it used in a specification (although I did vaguely remember the term and even a little bit of its history). I thought that it would be of interest to take a look at the subject and see if there is any value to awakening its use.

COURTESY KEN NORDEN
As far as I can deduce—based on a review of references to the Shadow Factor—the term was first suggested in the early 20th century by Konrad Norden, a scientist in illumination engineering. In 1948, Norden wrote and published “Shadow and Diffusion in Illuminating Engineering,” a book that we can assume is the bible about Shadow Factor. His idea is a simple one: A lighting instrument to be tested is directed towards a light meter and the lighting intensity is measured (yes, either foot-candle or lux). Then, an opaque disk—the “Caster”—is placed in the center of the path, and the intensity in the shadow area is measured again under this new condition. The expression that defines the calculation to be used in determining the Shadow Factor (which was approved somewhere along the way by the International Illumination Congress, forerunner of the CIE) is given by:


This formula is straightforward enough. If the light source is small (approaching a point source), the shadow would be very dense (assuming that the cast shadow was greater than the diameter of the light meter’s disk). In this case, the Shadow Factor would be close to 1.0 as the illumination in the shadow area would be very small. As the size of the light source increases, the shadow area’s illumination would increase, and could, theoretically, approach zero (i.e., an overcast sky).


Fig. 1: Shadow Factor test setup The sketch in Fig. 1 shows my test setup. The caster I used was an opaque piece of cardboard, about 1-3/8 inches in diameter. This was slightly larger than the approximate 1-inch round disk of the light meter. There was a little mystery at this point. If I employed the same dimensions used by the manufacturer, the results were quite strange and not practical. All Shadow Factors calculated for different aperture-sized instruments using his setup were crowded between 0.9 and 1.0. It became very obvious that the relative dimensions of the light meter, shadow caster, and distance of the caster to the meter, can greatly affect the value and usability of the calculated Shadow Factor. I can only guess that the dimensions that were noted as being used by the manufacturer were incorrect. My solution was to set dimensions and spacing by trial and error until I obtained more practical values.

You would suspect that the larger the instrument’s aperture, the lower the Shadow Factor. This is true except for one exception—the 5KW TV Softlight appears out of place as the area of its aperture is larger than the 4KW Super Softlight. This result could be true as its reflector is a specular surface as opposed to the 4K’s perfectly diffuse reflector. But, due to the conflict of the conditions between my test setup and the manufacturer’s, I would be reluctant to state this as an accurate conclusion. I did not actually have either the 5KW TV Softlight or the 2.5KW TV Softlight to test under my conditions.

SOME DETAILS
Certain specific results should be noted. When a piece of diffusion is clipped on the barn doors of the 6-inch Fresnel, the “aperture” size was increased to be about 10 inches in diameter (an area of 81 square inches). This increase in diffusion is reflected in its lower Shadow Factor value of 0.930, as opposed to the unfiltered result of 0.992. A similar increase in diffusion is noted when an egg crate is placed on a 2KW Zip Softlight. We pay for the increase in directivity with the use of this accessory with a decrease in the “softness” of the Softlight. This is something that we know from experience. Note that in all this discussion about diffusion and Shadow Factor, the actual value of the illumination does not enter into the comparison of Shadow Factor between instruments and their configurations. For example, we know that adding an egg crate will decrease the light output of the Softlight as well as changing the Shadow Factor.

WHO KNOWS WHAT EVIL LURKS?
I think that it is now possible to answer the question of the usefulness of reviving the Shadow Factor from its dormancy. It was quite apparent that in order for the results to be meaningful, the measurement must be taken under identical conditions—not only with equal dimensions and sizes, but also to the use of an identical light meter (or, at least, one with an identical disk surface area). I would guess that this requirement might be very difficult to satisfy. Let us suppose that you do surmount all obstacles and manage to assemble a group of instruments for a Shadow Factor test. From this arrangement, you would obtain a whole set of values of Shadow Factors that I think would be predictable—just based upon the size of the instrument’s aperture as occurred in the example. There might even be a slight departure as was illustrated by my conjecture about the effect of the specular reflector of the 5KW TV Softlight. Even so, would all the effort be worth it? I doubt it. In my opinion, I think that we should let the Shadow Factor stay in its resting place.