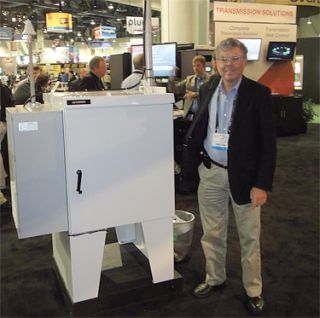 At this year's NAB Show in Las Vegas, it seemed like there were fewer new products in the area of TV transmission compared to previous years.

The completion of the DTV transition in 2009 and build-out of maximized facilities on final DTV channels in 2010 is probably the main reason for this, but I suspect the uncertainty about how much spectrum TV broadcasters will have in future years and the possibility many stations may need to change channels (at least partly at government expense) had an impact as well.

Mobile DTV was one area where I found new products on display. Harris was one of the first companies to offer Mobile DTV gear and at this year's show they offered their second-generation line of Mobile DTV equipment, ranging from the Selenio encoder/multiplexer package to their new Maxiva UAX transmitter and everything in between.

Screen Services, which displayed some Mobile DTV equipment at the show in 2010, had a fully functional system on display in their booth this year.

Larcan showed its first Mobile DTV products and, like the other vendors, offered a complete solution from encoder through the transmitter.

The author with the Harris Maxiva Linear added Mobile DTV capability to its ATSC exciter.

One encouraging sign was manufacturers were more open to mixing and matching encoders, multiplexers, ESG and exciters from different companies.

For example, Axcera claimed their exciter worked with both Harris and Rohde & Schwarz multiplexers. As the proposed ATSC standard on exciter interfaces is finalized, interoperability between different manufacturers should improve.

Thanks to the 50-volt Freescale RF LDMOS transistors, solid-state transmitters can now challenge IOT transmitters in power and efficiency without the complexity of crowbars and HV power supplies.

Larcan came up with an innovative solution to this problem. The coolant is supplied to a coolant plate and the amplifiers bolted to the plate with a few screws. Larcan's design distributes heat across the bottom of the amplifier module and eliminates hot spots.

When amplifiers need to be repaired, the coolant flow does not have to be shut off. There are no quick-disconnect fittings to leak or clog. Larcan had their liquid-cooled transmitter operating into a dummy load in their booth to demonstrate its compactness, simplicity, low radiated heat and low noise.

John Tremblay, vice president of engineering for Larcan with the Larcan Oasis. Screen Services showed a line of digital on-channel repeaters with impressive echo-canceling capability. The company claimed more than 40 dB cancellation, but it is difficult to make comparisons as there are different ways to measure this.

Linear improved echo-cancellation capability in the on-channel repeater line it introduced at the show last year.

I was encouraged to see manufacturers building in more diagnostic capability into their gear. One example of this was Linear's ATSC exciter, which could be used with their solid- state transmitters or as an upgrade for another manufacturer's existing transmitter.

While most exciter manufacturers have provided some built-in signal-quality monitoring, at least displaying shoulder level and SNR, Linear's Web-based monitoring mimics the displays most engineers are familiar with and it appears very easy to use. Perry Priestley said that when they compared the readings from the Linear exciter Web display with those from a Rohde & Schwarz ETL, the results were within 1 dB. While this wouldn't be suitable for an FCC proof of performance, it provides a great way to confirm transmitter performance during day-to-day operation.

It can be hard to find room in today's tight budgets for test gear, especially gear that isn't used on a day-to-day basis. Built-in RF signal monitoring such as that from Linear, Harris, Thomson and others is appreciated.

Mobile DTV does not require any additional RF monitoring, but it is necessary to verify the mobile data stream is being sent with the consistent tables and packets are not being dropped. Due to the error correction and robustness of the Mobile DTV signal, problems are not always obvious just looking at a Mobile DTV receiver.

Decontis made their first appearance at the NAB Show, featuring their software-based ATSC Mobile DTV monitoring solution in the Mobile DTV Pavilion in the North Hall. Acrodyne Services will be selling and supporting Decontis products in the United States.

Nearby, DTV Interactive showed their monitoring solution and the low-cost Mobile DTV encoder, ESG, multiplexer and exciter I mentioned in my CES article. See my previous TV Technology articles on the Decontis and DTV Interactive products and my coverage of NAB 2011 in the April 15 RF Report.