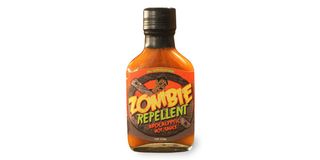 SERIOUSLY -- It’s the dead of winter, for crying out loud. The good people of Great Falls, Mont., are not about to fall for some malarkey about bodies rising from graves in February. Not unless great-granddad was buried with a set of chisels and a blowtorch.

Based on what I’ve read so far this week, the Emergency Alert System hack that warned of zombie invasions in a handful of communities did not elicit so much as a phone call from the general public. Given the cultural appetite for zombies, one would expect people to want to see them. You can bet if it went out as a text, the malls of Great Falls would have emptied of Millennials in a heartbeat.

Maybe the public is just so used to the EAS tones that they pay no attention to them. They are, after all, most often accompanied by, “This is a test. This is only a test of the emergency broadcast system. If this were a real emergency…”

Unfortunately, EAS receivers are not so indifferent, and I have to wonder, as one of the great unwashed, why are these things still activated by an audio tone that just about anyone can record? Especially now that the EAS is hooked up to the Interwebs? Word is, a YouTube user created the fake alert used in the hack. It certainly sounds genuine, except for the bit about zombies. The tones are spot on and were enough to trigger a downstream TV station’s EAS receiver when a couple of uninformed DJs replayed the spot at a primary-entry-point radio station in La Crosse, Wis.

The maker of the video, Tyreehot, associated with www.hauntedhotsauce.com, said he had no connection to the Montana hack, though in his YouTube comments admits that it was his voice used in it.

“I created this video four years ago as a Halloween prank. It’s been ‘borrowed’ by many others in the past… if the ‘feds’ can connect me here in Atlanta to a TV station in Montana, then they’re the creative ones,” he said.

Maybe, but here’s how the feds feel about their EAS tones:“No person may transmit or cause to transmit the EAS codes or attention signal, or a recording or simulation thereof, in any circumstance other than in an actual National, State or Local Area emergency or authorized test of the EAS. Any rebroadcast of the EAS tones and attention signal not only would violate FCC rules, but also pose a public danger because rebroadcast of these tones could trigger a false alert from EAS equipment that picks up such a rebroadcast.”

So now we have the tones all over the Internet from which the EAS system now picks up activations. Add a little hackitude, and some dude in Atlanta scores free ad time on a few cold-climate stations for Haunted Hot Sauce.

Whether it was coincidental or otherwise, the zombie hack occurred in conjunction with a threat by Anonymous to disrupt online streaming coverage of President Obama’s State of the Union Address. Since the EAS is also used to deliver emergency presidential messages, whoever pulled this off had best be off the grid. The FCC, FEMA and the FBI are saying no-thing, which can only mean one thing—that Monday is a federal holiday.

Whether or not the consumer press picks up on the implications of this one still remains to be seen. The nation’s emergency alert network was hijacked for the first time since it was created. How hard would it be to edit together a fake video of the president warning us of a more realistic hostile invasion? We’d be shooting at each other like clay pigeons.

Thankfully, I’m skinny, and look remarkably like my surroundings.