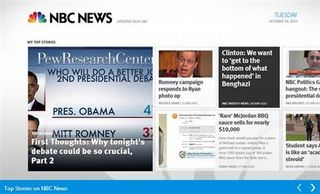 Computer, tablet and smartphone screens are the new second windows to television viewing. As a result, broadcast networks are challenged to keep up with new platforms and operating systems so viewers can see their programming. The latest OS they must accommodate, Microsoft Windows 8, was launched last week.

NBC News has launched a new free app for Windows 8, scheduled to be demonstrated this week for Democracy Plaza in Rockefeller Plaza outside of NBC’s headquarters in New York City. Microsoft is a sponsor for Democracy Plaza, which is part of the network’s election coverage.

NBC has a second app for Windows 8. Breaking News, the startup run by NBC News Digital, displays breaking stories from hundreds of news sources on the new Microsoft platform.

“Being one of the first news organizations to have an app on the new Windows user interface reflects NBC News’ commitment to making our high-quality journalism available in as many places as possible,” said Vivian Schiller, senior VP and chief digital officer of NBC News. “Windows 8 enables users to consume and engage with our content in an intuitive and innovative way.”

The new app offers breaking news, video interactive graphics and variety of social media tools. It can personalize news feeds, and has the ability to cache news stories and access them offline and to a “Decision 2012” section, where users can explore issues, access polling data and see what people are saying on social media about the candidates.

ABC News also announced a new Windows 8 app. The new app went live earlier this week. Like the ABC News app for iPad, the ABC News Windows 8 app features a variety of video, news stories and content that is tailored to different needs of users throughout the day.

A morning edition includes more stories and articles, while an evening edition focuses primarily on videos and picture slideshows. ABC’s app also features digital sections and features that are exclusive to the Windows 8 app. These include a lifestyle and fun section, a trending stories area and additional content for specific times of the day.

“ABC News continues to evolve and adapt to consumer demands in this ever-changing digital age,” said Doug Vance, VP of product development. “The ABC News Windows 8 app offers the same customized, personal news experience already available on iPad and Android devices. We are extending the reach of ABC News and have made our content even more accessible to a new and growing digital audience.”

FX Networks also joined the fray, introducing its own Windows 8 app for tablets, desktops and hybrid PCs. Billed as a “companion to the FX viewing experience,” the new application allows FX viewers to watch and contribute to the real-time discussion across Twitter, Facebook and GetGlue.

The live social media discussion can be presented in Timeline or Cloud View, based on the viewers’ preference. Through GetGlue, users can “check in” to any FX show to access community stats and view branded digital stickers. The app will also provide users with relevant information and short-form video that supports the network’s original series and movies. The app features hubs for each of FX’s original series.

“The FX app for Windows 8 is a stunning example of how content developers can create an immersive brand experience using the new platform,” said John Richards, senior director of Windows App Marketing for Microsoft Corp.