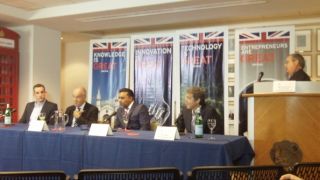 In this era of thousands of video news clips available whenever you want them and countless more being uploaded every day, in order to attract an online audience and monetize that video, it’s not enough for TV station websites to host content that mimics its main linear television channel. In fact, according to a high-powered panel of current and former news professionals and new media experts well versed in all things online, it’s how you “purpose” that video from the outset — across multiple platforms — and what happens to it virally after it has been posted that really counts with online marketers.

Sponsored by Streamworks International, a live streaming services provider based in the UK, a recent discussion entitled “The New Live News Paradigm: Anywhere, Any Device” sought to answer some tough questions about the value of online video and how best to engage the online audience during major news events.

The event gathered Joe Ruffolo, senior vice president of Digital Media at ABC News; Roy Sekoff, president, HuffPost Live and a founding editor of the Huffington Post; and Andrew Heyward, the former president of CBS News (who held the position longer than anyone at the network) and now an advisor to media companies.

Their winning strategy: If you build an audience for that video, using social media tools and interactive Web environments to actively engage them and keep them coming back, then you can begin to perhaps charge a subscription for a video service. Until they clearly understand how to do this, however, local broadcasters, with a lot less money to spend than their network and other deep-pocket competitors, will continue to mistakenly present an experience similar to traditional linear TV. This, said the panelists, is a recipe for eventual online disaster because attention spans among consumers are getting shorter, and creativity is often more compelling than real substance.

“Everyone’s producing video now, so what are you doing beyond that to engage the audience with that video?,” Heyward asked, adding that a fundamental shift in control has occurred, moving from the content producer to the content consumer. He said the average consumer, not the TV executive, now decides whether a video message has been delivered correctly or not.

Streamworks delivers audio and video over any network to any device, anywhere in the world using bandwidth from companies like Level 3 Communications. Level 3’s IP-based fiber network is also being used to deliver live, uncut video news feeds to news organizations like Associated Press Television News, which in turn repackages it for broadcasters around the world (or allows regional broadcasters to do it themselves). The company said its fully managed service for delivering live and on-demand video saves, on average, more than 30 percent bandwidth over traditional satellite by using specialized H.264 encoding and other date rate scaling techniques.

Ray Mia, the CEO of Streamworks — who also participated in the panel discussion at the British Embassy in New York City — said while everyone agrees that content is king, “Distribution is King Kong.”

“You’ve got to get that news video into the right hands, at the right time, or it loses value quickly,” Mia said. “There’s a time for on-demand viewing, but a live stream is the most compelling way to deliver the news. The technology now being deployed is making this easier and easier.”

At ABC News, Ruffolo said they've seen the biggest jump in video consumption across its mobile platforms, particularly during coverage of the recent political party conventions. This significant upswing in on-the-go usage, according to Ruffolo, is exactly why the old way of delivering news does not work for viewers anymore. Consumers rarely watch the network’s flagship news program “World News Tonight” when it airs at 6:30 Eastern in the evening. They record it for later viewing. Or they watch a small portion on TV in real time, and then watch the rest later online.

“We now look at ABC News’s Digital Media division as supporting three streams simultaneously: TV, the Internet and mobile,” Ruffolo said. “All three share some common content, but how they each deliver it is vastly different.”

“You also have to be careful how you use text,” he added, “as it can get in the way of the video viewing experience. I’m not saying that text is not important. Good journalism always gets people’s attention, but for the casual viewer, they want to see the video first and foremost. An exclusive video [or a uniquely edited clip from someone else’s video] gets people engaged, so you want that video front and center on any website and easily accessible across all mobile platforms.”

In discussing his company’s efforts behind HuffPost Live, a new in-house produced streaming video network that provides 12 hours of live video per day, Sekoff said they’ve hired 100 people, originating from all aspects of the online world (including former CNN, MSNBC and The Onion employees) to staff the new venture.

HuffPost Livetakes advantage of The Huffington Post's (owned by AOL) expanding online community and social platforms to engage viewers around the world — who can also join in live via webcam. The network launched in August with 10 hosts, eight hours of live programming out of New York and four hours out of Los Angeles each weekday. Highlights are posted online overnight and on weekends.

“There’s a whole new generation of talented, young digital media professionals that get the idea that this new online experience is a two-way dialogue,” Sekoff said. “We, as media companies, are no longer just talking at people. We are listening to what they have to say and responding to it as quickly as we can. When we’re successful, consumers, in turn, are responding back. That’s what we mean by engaging the audience. If they don’t respond back, they are not engaged, and you, as a media company, have to figure that out if you want advertisers to support your content service.”

Sekoff joked that HuffPost Live and the industry in general is in the "zygote" stage when it comes to understanding what type of content online viewers want to watch and how best to engage them to get the most value for advertisers and online marketers.

A video of the discussion is available here.