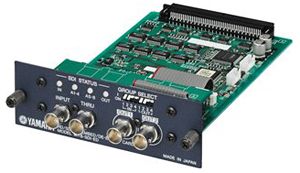 The MY8-SDI-ED, which is compatible with every Yamaha digital mixing console and DME series digital mixing engines, delivers 8-64 I/O channels, based on the number of consoles and cards used.

The MY8-SDI-ED gives input and output of HD-SDI embedded audio signals. The card features one HD/SD-SDI input, two HD/SD-SDI outputs (same signal), and one through-output (re-clocked). It is able to de-embed up to 2 of the 4 audio groups, multiplexed in an HD-SDI signal, and has the ability to embed 2 audio groups into an HD/SD-SDI signal for output.