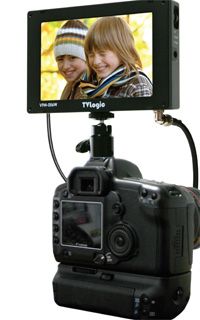 Newly designed 3D glasses provide seamless 2D or 3D viewing of one or multiple monitors. These monitors can accept multiple 3D signal formats and are designed for broadcast OB, production, and post-production environments.

The LVM-074W is among the new monitors designed for DSLR cameras.

"This is the most capable viewfinder and production monitor we've ever built," said Wes Donahue, director of channel marketing.

Weighing just 600 grams, the 7-inch LVM-074W can double as both a production monitor and an on-camera display. It includes 1024x600 resolution, an HDMI-to-SDI active loopthrough, focus assist, image size scaling optimized for Canon DSLRs and a waveform/vector scope. © 2011 NAB