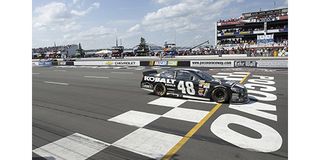 ATLANTA—TNT is allocated just six spring Sundays per season to present its NASCAR coverage, much fewer than ESPN or Fox. But the network is compensating for that lack of air time with a new feature that’s intended to give viewers a keener picture of what the life of a race care driver is really like.

Tom Sahara, vice president of remote operations for the TNT, feels that new complement, a pre-race segment called “All Access”, has accentuated the cablenet’s package.

With TNT in the midst of its 2013 schedule (and Turner’s 31st season), which started June 9 with the “Party in the Poconos 400 Presented by Walmart” and wraps July 14 for “NASCAR Sprint Cup Racing From New Hampshire,” Sahara noted that additional coverage can only heighten the entertainment value of a spectacle that he considers “akin to broadcasting the Super Bowl each weekend.”

THE SHOOTER’S EYES
From the wave of TNT’s starting flag at Pocono, the typical number of cameras used for a broadcast “runs in the low 40s,” but that number varies weekly since “all of the tracks are different and each has its own unique features,” Sahara said.

NASCAR Sprint Cup Series driver Jimmie Johnson (48) wins the Poconos 400 at Pocono Raceway in Long Pond, Pa., June 9. The various combinations are still based on a featured camera, as the network “mainly uses the Sony 2500 series, all of which are cabled and connected to the 60-plus miles of fiber-optic cable used in each broadcast,” he said. “Daytona is a highlight and for that event, we go up to the high 40s,” with 20 to 24 grounded.

The Sony 2500s are accentuated by “five or six RF wireless cameras [the same make and model] that roam the infield, allowing shooters and reporters access to the pit crews and other happenings. They are supplied by TNT’s facility provider for its NASCAR coverage, Pittsburgh-based NEP Supershooters, with the HD RF link and data control for the cameras provided by Hanover, Md.-based Broadcast Sports Inc (BSI).

Sahara added that each of NEPs RFs “are equipped with an RF monitor, which enhances TNT’s coverage because the reporters can watch a replay of what the announcers are talking about with the interview subject.”

All told, the content and data is shared via a “very sophisticated” car camera system, according to Stephen Miller, racing supervisor for BSI. “It’s one of the only systems in the world that provides simultaneous movement and data control,” not just for the cabled cameras, but also for the audio, scoring and stats, and Internet access.

FROM THE INSIDE
One special angle of TNT’s coverage is that it also equips eight of the cars with BSI’s compact, purpose-made gyro-stabilized HD cameras—up to four per car— “so we can actually select which view we want for each of the eight cars,” said Sahara. “That gives the director lots of leeway about what story to feature. It may concern the leader or the second driver who’s bearing down on his heels,” etc.

TNT and BSI work closely with NASCAR “to ensure the cameras and their mounts are placed at certain spots to avoid upseeing the car’s balance,” according to Miller, “while also maintaining its safety and integrity.” He noted that before a camera (or any support equipment) can be mounted in the car, a request must be submitted to NASCAR.

Sahara added that employing the BSI cameras enables TNT “to capture crucial shots of many of the crashes, so [the viewer gets] a good view from a car in the back of the pack. That allows us to see how the accident unfolds.”

BSI’s technician installs the new in-car mini Point-of-View (POV) camera at Daytona. Which cars are equipped with BSI’s cameras has to do with an equation that has more than a few variables, he said. “That concerns sponsors, the teams, the drivers and the favorites to win that’s day’s race. We use a complicated matrix. It’s based on who has relationships with NASCAR, the various styles of the drivers and their performances at the various tracks.”

ROLLING IN
TNT gets ready for its NASCAR broadcasts with several units in tow: Its main unit is actually two super trucks (“With 40 cameras coming in, we need more than one unit,” said Sahara) that the cablenet supplements with a tape subswitch truck, due to the high volume replays.

The TNT setup also includes two B units, which are also key to the main broadcast; then BSI has two trucks with all of the RF equipment for the approximately 40 in-car cameras (and a second truck for the radio network).

TNT also sets up a fourth unit that becomes part of the core network of television trucks with the audio submix, via Yamaha and Calrec consoles, with three levels of mixing—one for radio communications between the teams, another for the sounds of the course and a third for production.

“We have around 80 mics set up around the track” said Sahara, “that are mixed in one truck before the audio effects submix; that feeds into the main production mixer,” which is added to the broadcast. Grass Valley switchers, and routers from Grass and Evertz, round out the equipment mix.

Also contained within the truck setup are the Final Cut Pro edit systems, which are networked with an EVS Broadcast Systems video server for replays. “As soon as a package is cut, it’s loaded onto the EVS for playback,” he said, “so if an editor wants a particular clip, he gets it from the EVS.”

While the task at hand each Sunday is, literally, a major production in anyone’s book, it’s second nature for Sahara and his crew. And it’s the enormity of that weekly undertaking, which is inspired by the nation’s thirst for more and more NASCAR content, which has also resulted in teh creation of “All Access.”

ATLANTA—Always looking to enhance the viewer experience, TNT debuted “All Access” during its 2013 NASCAR Countdown to Green Presented by Kelly Blue Book pre-race coverage (as well as on www.nascar.com). While such accentuation of its broadcasts is new, the concept isn’t; it calls for the drivers to be followed by camera crews 24/7 so they can document the lives of the drivers for the viewers.

TNT’s “All Access” is shown online after its initial broadcast run. “The fans see the driver at the tracks, but they don’t see the hard work that takes place during the week,” said Sahara of the effort, which has featured looks into the lives of Denny Hamlin, Brad Keselowski, Juan Pablo Montoya and Kurt Busch. “For instance, the drivers always go out and test cars and new products, or might be driving in another series. They don’t have four days off.”

The segments are usually shot and edited prior to the race/broadcast, but the camera crews are also on site, as they can update the stories that day. The crew usually consists of camera-sound-producer, but on occasion TNT employs two crews.

“Plenty goes on away from the track and outside the car,” said Sahara. “That part of the story is brought into the broadcast; if something is going on with the teams, that news comes through via social media (@NASCAR- TNT on Twitter), which has proven to be a valuable tool in keeping the fans updated during a race.”

The toughest part of broadcasting NASCAR, he added, is “coming in at mid-season with that short window, so we need good stories for the fans. That’s the main difference between us and our competitors. They have more time to develop stories,” Sahara said.

At TNT, it’s part of creating a richer experience for the viewer. “Usually, they get [that day’s performance or a feature] and don’t see how they culminate at the end of the race,” he said, “but with us, they do.”