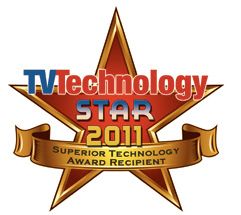 3D, 4K, Mobile DTV and workflow efficiencies for multiplatform production and distribution were among the main themes at the 2011 NAB Show and the STAR Award recipients reflected the advances in these technologies. Attendees seemed to have shaken off the apprehension and caution of the past several years, reacting with enthusiasm to the latest developments in professional audio and video production gear. Congratulations to this year's winners of TV Technology's STAR Award—now in its 11th year of recognizing technical excellence!

AJA's Jon Thorn accepts the STAR Award for the AJA Video version 9.0 driver software for KONA 3G. The latest version supports true 4K playout and monitoring. KONA 3G is a multiformat SD/HD/dual-link/3G and 2K video I/O system with 4K playback in YCbCr and RGB, at resolutions up to 4096x2160. Mac and PC versions are available for download.

Angus Mackay from Avid accepts the STAR Award for PhraseFind. PhraseFind enables phonetic searching of a non-scripted recording to help find multiple takes of any given shot. Avid says a free trial is coming soon. It works on Media Composer, Symphony and Newscutter, both Windows and Mac versions.

Cineventions' Dan Vance (R), accepts the STAR Award from James O'Neal for the company's ZoomCrane, a scissoring camera support device that collapses to a short length, but quickly and smoothly extends the camera forward and the counterbalance rearward. It provides smooth shots and can be set up in less than 45 seconds.

Ensemble Designs' David Wood, Mondae Hott and Cindy Zuelsdorf accept the STAR Award for the company's Avenue Flexible Matrix Router, which features a scalable and flexible design, with ports designated as either sources or destinations. The 1RU router control panel has a real-time, built-in LCD monitor to preview sources and destinations.

FOR-A's J.R. Kitahara accepts the STAR Award for the FOR-A VFC 7000 super slo-mo HD, 3D camera system. The first of its kind, the system, which features solid-state recording, combines two VFC-7000 cameras and syncs frames at rates from 50 to 700 fps. It features SDI out and records in 1080i and 720p.

Harmonic's Tricia Justice accepts the STAR Award for the company's Omneon MediaPort 7000. The MediaPort 7000 series of I/O devices support DV, MPEG and AVC-Intra, mixed-format and -resolution playout, as well as up/down/cross conversion and simulcast on every channel.

Paul Eisner with Harris accepts the STAR Award for the Harris Selenio. It takes the place of several pieces of gear in TV station operations, including ingest, A/V processing, transcoding and IP networking. With a easy-to-use browser, Selenio interfaces with external feeds, converts video for streaming and manages audio level—all in 3RU.

Tom Favell, managing director of HiTech Systems, accepts the STAR Award for the company's AVITA modular server and device control system. It comes with up to four control modules with configurable buttons that can be mixed and matched to suit individual needs. It may be operated with a browser in connected PCs or tablets.

Litepanel's Ken Fisher accepts the STAR Award for the Litepanels H2, which uses high-intensity LEDs, allowing fixtures to be placed 20 feet or more back from scenes that ordinary LED fixtures can't reach. The 100 Watt H2 fixtures provide light equivalent to a 1,000 Watts of legacy lighting fixture, and uses just 10 percent of the energy.

Robert Kulesh (L) and Linda Swope from Matthews Studio Equipment with the STAR Award for the DC Slider, a counter-balanced, multifunction, multi-angled camera platform providing effortless camera movement from horizontal to vertical. It provides 5.5 feet of camera movement, and can be equipped with an accessory motor for remote operation.

Simon Larn (L) and Peter Daffarn with the STAR Award for the Photon Beard PhotonSpot Nova. It uses light-emitting plasma to deliver 14,000 lumens, and has a useful lifetime of about 20,000 hours. Power consumption is just 273 Watts, and the unit can be mains- or battery-powered. No fans are required and it focuses from 12 to 55 degrees.

Andres Hilmer of Reidel accepts the STAR Award for the company's MediorNet Compact. The unit provides transmission of signals, including audio, video, control, and intercom communcations from one node to another node at 50 Gbps.

David Ross accepts the STAR Award for the Ross Video Carbonite, a cost-effective compact, self-contained video production switcher with up to two M/Es, built in 20-window multiviewer and available with either 16 or 24 inputs.

Snell's Neil Maycock accepts the STAR Award for Snell & The Application Store's Screentoo partnership. Morpheus automation is used to drive metadata from ScreenToo to second-screen apps on iPads and mobile platforms. It's available for media and broadcast organizations to distribute as their own branded apps for voting, polls, chat, and more.

Sound Devices' Jon Tatooles (L) and Matt Anderson accept the STAR Award for the company's Pix 220 & 240 video recorders. The Pix 240 has HD-SDI and HDMI out, Pix 220, HDMI out only. They support Apple Pro res 422 or Avid DNxHD codecs onto solid state, CompactFlash or external eSATA.

Telairity's Harlan McGhan accepts the STAR Award for the SES3200 Mobile Video Encoding System. The modular unit supports multiple channels of mobile video and eliminates the need for separate multiplexers, routers, switches and cabling. Any video input can be internally connected to any encoder.

Wes Donahue from TVLogic accepts the STAR Award for the VFM-056W/WP 5.6-inch HDMI on-camera monitor, which features an LED backlit LCD display, and comes in two models. A magnesium-alloy case houses a 5.6-inch display with a full set, including DSLR scale, focus assist, and audio level metering with speaker and timecode display.

(L to R) Utah Scientific's David Burland, Jeff Levie and Tom Harmon accept the STAR Award for the Flex-I/O Option for Utah-400 Routers. These are self-contained interfaces that plug into the router backplane, replacing BNC or optical connectors, and allowing users to switch from analog to SDI in SD or HD flavors, and to also convert from copper to fiber.

Steve Ward (L) and Chris O'Neill accept the STAR Award for the Vinten Vision Blue. It provides DSLRs or other small cameras with a Vinten head that has performance features familiar to users of Vinten Vision head products. These include infinitely adjustable "Perfect Balance" and LF drag technology.

(L to R): Wheatstone's Brad Harrison, Phil Owens and Paul Picard are congratulated by TV Technology Editor-in-Chief Tom Butts on receiving the STAR Award for Wheatstone Dimension One, a space-efficient audio console with faders that control two sources, spill functions out onto separate faders, and can be paged together or separately.

Wohler President Carl Dempsey receives the STAR Award for the Wohler Pandora Loudness Analyzer, which monitors up to eight channels of audio embedded in 3G/HD, SD-SDI and discrete AES signals, using a touchscreen interface that runs on a user's iPod.