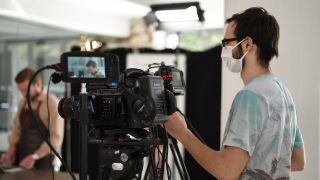 WASHINGTON—As television and film production begins to open up after four months of being shut down due to the coronavirus pandemic, producers and crews have learned a simple lesson that has applied to how so many other enterprises have encountered when trying to resume operations.

No one size fits all.

That was one of the many takeaways from webcasts held last week from the two most prominent industry associations for the film and TV industries. The bicoastal webcasts were sponsored by Hollywood Professional Association—which presented the view from Hollywood—and the SMPTE NY chapter, which discussed the challenges of restarting production in the Big Apple.

The HPA has created an Industry Recovery Task Force headed up by industry veteran Leon Silverman who spoke about how production has changed since March.

TV and film production is not just limited to the coasts, though. And as we’ve learned over the past several months, certain areas of the country have been dealing with the effects of the lockdown in different ways and at different times, according to Dr. Daniel Z. Uslan, co-chief infection prevention officer for UCLA Health.

“If you had asked me three months ago that New York would be relatively safe to shoot in and Atlanta would not, people would look at you like you're crazy,” Uslan said. “It's completely changed since then, where New York is safe now and Atlanta and Georgia in general is experiencing a surge.”

Industry associations, including SAG/AFTRA, Director’s Guild of America, IATSE and the International Brotherhood of Teamsters, have developed guidelines that address the unique issues to on-set production, taking into account the challenges of social distancing among performers and crew members.

PLUS: 'Survivor' Finale Conquers COVID-19 Challenge With Help of Tech

“The recommended guidelines state that there's regular testing for everyone who's going to be on set, the actors and crew,” Uslan said. “But there's also been a lot of attention on availability of testing.”

The importance of testing cannot be overstated. Among the guidelines is the recommendation of setting up “zones” that would define the amount and risk of contact to avoid spreading the virus and establish the amount of testing involved. Crew members, including hair stylists, makeup artists, audio techs and actors, would comprise members of “Zone A.” Because of the close interpersonal interaction, these people would need to be tested most often.

“Zone A is not just a physical space but a state of being,” said Joseph Reidy, with the DGA, during the SMPTE presentation.

Those in Zone B include other crew members on the set that are more able to practice social distancing, such as camera and lighting employees for example, who could be tested less often. Zone C comprises the “rest of the world” and represents perhaps the biggest risk of all.

“Zone C is the outside world that's your own home or the hotel where you might be staying at or the restaurant you stop at on the way,” said Reidy. “It's anywhere other than the environment of the production, a set and its footprint. It’s important to know because you are going to be mingling in Zone C every day and that's where you will end up getting infected.”

“Keeping people in zones ensures that if in the unlikely event that there is a case of COVID-19, you've limited the number of people in contact with that case and so it makes contact tracing easier and it makes decisions about who needs to quarantine easier as well,” Uslan said.

Another recommendation is to designate a COVID Safety Officer on-set who would be responsible for ensuring safety guidelines are being followed.

“It could be somebody from the medical field, who has advanced training in Infection Control and Prevention,” said Uslan. “Most importantly, you want someone who is well trained and understands some of the challenges and be responsible for overseeing everything from testing to enhanced cleaning and disinfection, physical distancing, the use of personal protective equipment such as masks and gloves and how to use those safely.”

With much of post-production already having been moved to cloud-based workflows over the past decade, the “new normal” of social distancing has only validated this technology move even further.

According to a recent survey taken American Cinema Editors, 95% of editors are working from home now, according to association president Steve Rivkin.

“I think editors are in a unique position to continue working from home,” Rivkin said, “I think some of the big challenges are working out the logistics, technically, obviously perfecting the way we work from home.”

Rivkin added that security concerns surrounding working on high-impact projects have been lessened in recent years.

“In our instance, editors are remotely logging into assets that are housed securely at our studio and media as well so there is no media stored at home,” he said. “Which is I think a great relief to the studios and producers.”

Improvements in communicating among production crews has also improved as more people get used to Zooming instead of meeting in person.

“Communication among other crew members has improved already in the sense that you don't have to go take a meeting with someone to be able to talk to them,” said Rivkin. “We use programs like Slack, Microsoft Teams, we use Evercast to review sequences together and recently we started actually remoting into each other’s projects.”

There are still some elements that are harder to do via remote, including HDR, but progress is even being made in that area as well, according to Katie Fellion, head of Business Development and Workflow Strategy, Light Iron.

“For HDR, we're right on the cusp in terms of being able to do live HDR outside of a facility setting,” she said. “And a lot of that relates to both bandwidth in a client's home, as well as the devices that they're using. I think in the next couple of weeks we'll probably see some manufacturers coming out with different options.”

The general consensus among all of the panelists on both coasts was that the changes imposed by the pandemic over the past four months have permanently altered the production landscape forever.

“In our industry, change happens slowly, unless it is forced upon us,” Rivkin said. “And I think one of the silver linings of this horrible dark cloud, was that technology that was kind of on the sidelines—and perhaps may have taken years to adopt—all of a sudden we're finding that it's incredibly essential in this ‘work from home’ environment.”

Michael Cioni, global senior vice president of innovation at Frame.io, said he has received numerous texts from directors and producers saying, in essence, that “we’re never going back.”

“COVID allowed them to discover an entirely new process of working,” Cioni said. “A former head of Paramount Studio told me ‘How did we not have this before? Why were we missing this, this is how we're going to do it forever.’”