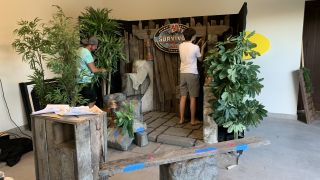 CBS’ “Survivor” proved to be far from immune to the unexpected changes COVID-19 thrust upon the television industry, an ironic twist for a show with competitors who struggle mightily to win Immunity Challenges that assure a degree of safety.

But just as with “Survivor” contestants, the show’s producers tapped into their ability to improvise and persevere as they met production challenges created by the pandemic for the “Survivor: Winners at War” season finale in May.

Rather than a two-hour finale in front of studio audience, the show announced in mid-April that it would respect social distancing norms and produce the show—during which host Jeff Probst would award its biggest-ever prize of $2 million—remotely, thereby protecting the host, contestants and crew from exposure to the virus.

“Because of the circumstances, this finale event had to be done using the least number of people, all working separately, safely from their homes,” says John Heard, co-producer and post producer of the show. “With that said, trust, teamwork and the ability to experiment and try new things were the cornerstone of the project.”

Knowing in-person production was out, the producers of “Survivor” began investigating their options for remote production. It didn’t take long to identify two issues that had to be addressed, says Heard.

“The first, how do we keep the high image quality our audience is used to for our show,” he asked. “And second, how can we interact with the camera systems remotely?”

While several different options for small cameras that could be sent to Probst’s house and the homes of the finalists were available, most could only be controlled from a dedicated control room, he says.

“This is where [Sony’s] XDCAM air excelled,” says Heard. “It has a web-based interface that could let us control certain functions of the camera and confirm that we had a working image.”

The XDCAM air service transports content from cameras to the cloud where it can be logged and shared by production teams. In the case of CBS “Survivor,” the team selected Sony’s PXW-Z280 4K 3-CMOS camera—three shipped to Probst for use on the improvised set he assembled in his garage and one each sent to the show’s three finalists for use in their homes.

“The idea was to be able to have the production team send out pre-configured cameras to the talent who don’t necessarily know how to operate any of the cameras,” says Martin Lindsay, media product manager at Sony Electronics, who worked with the producers on the project.

With Wi-Fi connectivity and an RJ45 jack, the Sony PXW-Z280 would be easy to control via XDCAM air. “The production team was able to remotely control the cameras in terms of some basic feature sets, such as zoom, focus and iris control, so they could set up the shots before the production started,” says Lindsay.

Positioned appropriately on tripods at the remote direction of the production crew, the cameras were locked down for the show. During initial show planning, pan-tilt-zoom (PTZ) cameras were briefly considered. “But as the creative moved forward, we realized that camera movement wasn’t what we wanted or needed,” says Heard. “Since the feedback had a slight delay, camera movement introduced an uncertainty that we didn’t desire.”

The producers chose cloud-based video communications app Zoom for the interviews Probst was to conduct with finalists during the show. However, both sides of the interviews were recorded separately by the cameras onto local media, says Lindsay.

The team based its post-production workflow on Sony’s Ci cloud platform. Footage from the cameras would be transported via the XDCAM air service to Ci where it would be prepared for editing. However, long before the shoot it was necessary to test the internet connections of Probst and the finalists to determine whether they had adequate bandwidth for high-res file transport from the PXW-Z280 cameras.

“We were fortunate that our final three contestants all had either fiber or gigabit internet speeds, so the transfer speeds from their homes were sufficient,” recalls Heard.

“For Jeff, we did run into some internet bandwidth issues. But this is where the Sony XAVC codec came in handy. For Jeff’s cameras, we could use the lower bitrate of XAVC-L 35 to minimize the file size without having to sacrifice the quality of the image. That proved to be a massive timesaver for us on the file transfer front.”

In preparation for the shoot, the team pushed metadata, such as location description, to each camera via XDCAM air that would then be used as the show was recorded. This ensured media files would have “human-readable” descriptive file names as they were being saved to Sony Ci, says Ali Amoli, director of Intelligent Media Services at Sony Electronics.

With all preparations complete and all accommodations made to enable the remote workflow, shooting began. As the cameras recorded Probst and the finalists, the production team could view proxy media via the XDCAM air connection to ensure they were getting what they needed.

“They could actually play media back from the remote cameras and have the cameras push that out to the cloud where they would have the ability to see production material before they actually executed a high-res transfer,” says Lindsay.

The setup gave the production team “a real mixture of great visibility and great functionality,” making it possible to ensure the best use of the content, says Michael Potts of Ci Media Cloud Service at Sony Electronics.

When the shoot was completed, Probst and the finalists were instructed to leave their cameras powered up and connected to their home networks for transfer of high-res footage to Sony Ci. “As soon as everything got into Ci, multiple people around the country could access the content and begin to do clipping and logging and bringing it [the content] into their editorial process,” says Amoli.

Looking back on the finale, Heard believes the project proved to be one of the most challenging and rewarding experiences the “Survivor” team has ever faced.

“Everyone, both on and off camera, spread in different locations and time zones throughout the country, had to wear many different hats to contribute to make this happen—something that in normal times is very much compartmentalized and divided into teams,” says Heard.

But working through the challenges ultimately paid off. “In addition to being fairly easy to assemble by Jeff and the contestants, this camera system—from a technical perspective—provided us with the feedback and aesthetic we envisioned,” he says.

For more information on “Survivor” visit the show website.