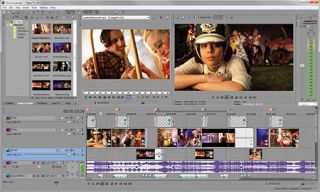 Sony Vegas Pro 11 is designed to work with every video format available, including stereoscopic 3D formats. (For 3D monitoring, editors can use an SDI or HDMI output and select channel-specific, top/bottom, side-by-side, blended or anaglyphic displays.)

A significant timesaving feature is the ability to mix resolutions or frame rates on the timeline without transcoding. Natively-supported codecs include XDCAM, XDCAM EX, NXCAM, HDCAM-SR, AVCCAM, RED R3D, AVCHD and AVC-based MOV files from DSLR cameras. These formats pass through the editing process unaltered, saving time and preserving original quality. But you can import any video file that your QuickTime Player will read, as Vegas harnesses that application as a plug-in for file importation. Vegas Pro 11 also supports 2K and 4K file resolutions.

The Vegas package is densely packed with features found in other, more costly, editing systems. It offers image stabilization and multi-cam editing that enables switching among as many as 32 video sources. The titling tool offers true 3D in a stereoscopic environment, and simulated 3D in a 2D environment. Templates make it easy to animate text and keyframe motion.

The effects palette is quite extensive, including more than 300 functional and stylized effects. In addition, Vegas Pro 11 provides more than 200 2D and 3D transitions. Many of these use GPU acceleration, which harnesses the processing power of the graphics card to speed up effects rendering and monitoring.

Effects are elegantly managed. Numerous effects can be added to each clip and are shown in a chain in the effects window. This allows users to easily alter a specific effect, or change the order of a sequence of effects.

The color correction tools provide extensive controls for improving or enhancing bland images, or for creating stylized effects. The effects palette includes most of the popular effects such as glow, lens flare, film grain, film effects, light rays, Gaussian blur, along with hundreds of others.

Image stabilization and slow and fast motion are provided with simple controls to adjust speed within a clip.

(Specific system requirements and graphics card recommendations can be found at sonycreativesoftware.com/vegaspro/techspec.)

I tested Vegas Pro 11 on a relatively modest desktop computer (AMD Athlon 2.2 GHz 64-bit processor, NVIDIA GeForce 7300 GS display adapter and 1 GB RAM) running Windows 7 Professional. My first lesson was to make sure I met the minimum specs. I discovered that 1 GB memory was inadequate for smooth playback, as 2 to 4 GB of RAM is recommended. I also recommend getting one of the approved accelerated graphics cards, which makes rendering three to four times faster as well as improving real-time performance.

Vegas Pro 11 provides device control for those who still use tape. As I shoot with memory cards now, I used the file import method. I found that I could import any format that the QuickTime player would recognize, as Vegas Pro uses this as a plug-in. There are only a few formats that the editor will not readily recognize; and these are generally proprietary ones such as DVCPRO or Avid DNxHD in an MXF wrapper. This can be a limitation when working with some media, but overall, Vegas Pro will accommodate just about everything. And there are simple solutions available for ingesting any format.

In terms of actual editing, Vegas Pro 11 has very comprehensive capabilities. It has all of the basic timeline editing functions for trimming and adding transitions. I did find, however, that using Vegas Pro 11 is not as intuitive as some of the competing programs. Many of the operations are not drag-and-drop, but are rather located in small icons or keyboard shortcuts. However, once you learn them, editing becomes a snap. But it does take some time to find the tools for the job. For example, when I wanted to slice a clip on the timeline, there was no obvious razor tool. After some research I found all I have to do is press "s" on the keyboard, but this is not readily obvious. I had the same experience when I wanted to remove an effect I'd added. There is a tiny icon that does the job, but it's located in the effect control window; not on timeline. It would be helpful if they grouped editing tools into a mini menu.

Vegas Pro 11 does an excellent job of mixing formats, codecs, resolutions and frame rates in a single project. I set up a project as 1080/24p and added every different format I could find: DV 30i, DV/24p, 720/24p, and 1080/60i. The sources included AVCHD, H.264 DSLR, standard DV and transcoded P2 footage. It all mixed on the timeline, allowing me to render the project out into a single format. I did find that I could not directly import Panasonic P2 clips, but a plug-in is available that makes this possible.

The effects palette is wonderful and includes many effects that would be expensive to purchase separately, such as film grain, lens flare and lighting effects. They are easy to apply, and the architecture makes them easy to manage. Effects are displayed in a chain, allowing you to go into any effect and adjust it, or to change the order. This can be vital when one effect interacts with another. For example, adding glow to an image at the end of a chain may not look as good as when it's placed at the beginning, where the highlights are brightest.

I tested both image stabilization and motion control. The image stabilization uses a simplified interface with few controls, but it achieves very effective results with far greater ease than the more complicated versions. It took me a while to figure out how to create slow motion, or as Vegas Pro 11 calls it "Time Stretching." But it is easy to apply. You just drag a clip's end to make it longer or shorter to achieve slow or fast motion. You can also access more precise controls that allow you to insert keyframes and contour the motion change. The slow motion was very smooth; apparently the function created and inserted frames as opposed to just repeating them.

Space does not permit a review of the included DVD Architect Pro application. However I can say that it provides a diverse assortment of templates, making it intuitive and easy to learn. It burns both standard and Blu-ray DVDs with equivalent ease.

Sony Vegas Pro 11 provides a very impressive set of editing and DVD authoring tools in a single package. The learning curve is a bit steep, as it has so many features, and many of these are not displayed as obvious visual icons. Its strongest feature is the ability to mix formats, frame rates and resolutions effortlessly on the same timeline. And the effects capability in both video and audio realms is very comprehensive. It is, however, maximized for use in a Sony codec environment and a PC world. Those who use a wider range of cameras and codecs, and work with material from a Mac environment, will find some limitations. It's ideal for editors accustomed to Microsoft Windows who work with Sony, DSLR and AVCHD based cameras, as it's optimized to work natively with these codecs.

Geoff Poister, Ph.D., is a member of the film and television faculty at Boston University and is a regular contributor to TV Technology.