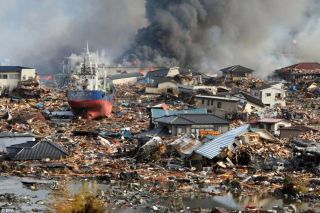 TOKYO: Sony today said it had to halt operations temporarily at five sites not directly affected by the March 11 earthquake and tsunami, due to raw material shortages. The company provided an update of its operations across Japan.

“At this time, Sony will endeavor to maintain supplies of the listed products in the market through reliance on existing inventory, to the extent available,” the company said. “While Sony is making every effort to resume normal operations at these sites, in the event shortages of necessary raw materials and components at these sites will continue, the company is considering alternatives, including possibly temporarily shifting certain manufacturing operations overseas.”

A shortage of raw materials is affecting operations for Sony sites in Shizuoka, Aichi, Gifu, and Oita Prefectures. The Tokai Technology Center Kosai Site in Shizuoka makes broadcast and professional equipment. The Centers in Aichi make camcorders, digital still cameras and LCD TVs. The Gifu site makes lenses for DSLRs and cell phones, among other items. The Oita site makes microphones and headphones. Manufacturing at these plants has been suspended through March 31, depending on the availability of materials.

As of March 22, 10 a.m. JST, Sony had confirmed the safety of all of its employees and those employed by its group companies in the region affected by the earthquake and tsunami.

Operations that remain suspended due to damage and power outages include the Sony Chemical & Information Device Corp. plants in Miyagi Prefecture, where the tsunami hit the coastline. The Shiroishi Semiconductor plant in Miyagi remains down, and two lithium ion battery plants in Fukushima, where a nuclear reactor is leaking, remain closed. The Sony DADC Japan in Ibaraki Prefecture, where CDs and DVDs are made, remains closed.

Intermittent operations have resumed at the Kisarazu Technology Center in Chiba Prefecture, where Blu-ray recorders and home audio products are made. Sony said the plant had no direct damage but had suspended operations due primarily to power outages, and may have to do so again.

Sony said all other manufacturing sties in Japan were operating normally thus far, though it will continue to monitor the available ability of raw materials and components. The company is continuing to evaluate the full impact of the earthquake, tsunami and power outages on its businesses and consolidated financial results.

Shares of Sony climbed around 3 percent on the Tokyo Stock Exchange today, closing at 2,600 yen (US32.10). American Deposit Receipts also are on the rebound, trading at $32.27 today after plunging below $30 right after the quake. SmarTrend today said analyst expect Sony to turn a profit this year, after posting a loss of $40.66 a share for the last fiscal year. The company is expected to post a profit this year of $123.67 a share. Sony’s fiscal year ends March 31. 2011.
-- Deborah D. McAdams