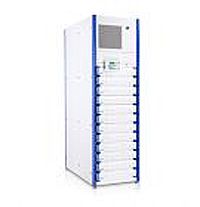 AMSTERDAM — At IBC 2011 in Amsterdam, German broadcast transmitter manufacturer Rohde & Schwarz introduced the R&S THU9, which it claims boasts the best energy efficiency values for solid-state TV transmitters—up to 28 percent for COFDM and up to 30 percent for ATSC. The transmitter handles all common digital and analog TV standards.

The pumps in the THU9 liquid cooling system operate in active standby, increasing transmitter availability. Coolant flow is calculated based on the system configuration and the number of amplifiers. Pump speed is adapted to the coolant flow, saving energy and extending transmitter life.

With 15 kW total output power for COFDM standards in a single rack, the R&S THU9 provides the greatest power density on the market. The maximum output power per rack is 18.5 kW for ATSC and ATSC Mobile DTV, and 30 kW for analog TV. The high power density makes the R&S THU9 the most compact system in its class. Depending on the configuration, as many as four single transmitters can be accommodated in one rack. If necessary, they can be combined into an N+1 system. The MultiTX concept makes optimal use of floor space and cuts down on infrastructure costs. Even when configured as a single transmitter, the R&S says its THU9 requires less space than competitive products. In such an all-in-one configuration, the pump unit and the bandpass filter are integrated in the rack.

The new R&S TCE900 transmitter control exciter can be configured as a transmitter control unit or as an exciter using plug-in boards. Since the base unit is always the same, the network operator can change the functionality directly at the transmitter site. The exciter can be software-switched from analog to digital TV standards such as DVB-T/-H, DVB-T2, ATSC, ATSC Mobile DTV and ISDB-T/ISDB-TB. Multiple transmission standards can be installed on one exciter. The transport stream can be fed to the R&S TCE900 exciter via the conventional ASI interface or via Gigabit Ethernet. External IP ASI gateways are no longer required.