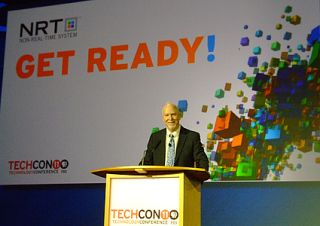 LAS VEGAS: If Kermit the Frog was speaking at this year’s PBS Technical Conference (TechCon), his signature refrain might be “It’s Not Easy Finding Green” in this unprecedented period of austerity and national belt-tightening. Nevertheless, some 450 members of the public broadcasting community are gathering next week in Las Vegas with a strong sense of purpose and beat-the-odds spirit of innovation.

Funding the future is a definite concern, especially for capital projects. “Yet,” says John McCoskey, chief technology officer of PBS, “I am always impressed at the ingenuity shown [by] public broadcasters to offer broad and high quality mission-based services to their communities. There are as many approaches to the budget crunch as there are unique stations in the system and we’re going to hear a lot [of their ideas] at the conference.”

David Pogue, New York Times technology columnist will keynote this year’s TechCon McCoskey will kick-off the three-day confab (April 11-13 at Caesars Palace), with a high-altitude look at recent industry trends, technology directions, and his predictions about the near future. Following that, his team will offer status updates on key “road map” projects.

Having survived the transition to digital, “Our stations are delivering more and better services to their communities [and doing it] more efficiently... what could be better than that?” McCoskey said. Central to keeping the efficiency ball rolling is the successful deployment of PBS’s Next Generation Interconnect System (NGIS), the network’s non-realtime (NRT) program distribution workflow. “The 10-year initiative passed its mid-point late last year,” he said. “We’ve been alpha and beta testing NRT with a significant number of stations... final production equipment began shipping last month.” When fully operational, the system will typically deliver content in digital file format two days prior to air, “potentially saving an incredible amount of recording time and effort on the station end.”

To insure continuity, a centrally located disaster, diversity and maintenance site (DDMS) has been installed in Nebraska. In addition, PBS opened an NRT support portal and is hosting regular webinars to brief stations on new developments. “We’ve always said we don’t just want to do this—we want to do it right, and we’re making good progress,” McCoskey said.

Pooling resources for operational efficiency, in particular master control consolidation, will be another hot discussion topic. With support from the Corporation for Public Broadcasting (CPB), some first efforts at centralcasting are underway in upstate New York; other station clusters are exploring it. “The challenges in implementing such a system are multifold and complex, but follow what the cable industry and several commercial networks are already doing,” notes McCoskey. “We’ll be getting a field report in a dedicated conference session. The outcome will provide a course to further projects along these lines; [our] technologists are a resourceful group. I see a lot of problem solving, collaboration and sharing of solutions.”

PBS CTO John McCoskey speaks at the 2011 PBS TechCon Going forward, McCoskey sees “a continuing focus on file-based workflows and automation, from producers all the way to stations and consumers. Technology [can] handle almost all normal processes and let staff know when and where an exception requires human eyes, ears and hands to resolve.” PBS is already well along that path with both the non-realtime delivery initiative and a system-wide transition to MPEG-4 that will reduce the number of satellite transponders PBS needs and add linear channels, according to McCoskey. “Today we transcode shows into as many as 20 different versions for all the possible outlets; automation will allow us to increase our distribution outlets [without] adding a lot of physical resources or staff.”

The complexity of formats and bit-buckets of intangible content will surely fill seats at numerous file-based workflow sessions, such as the storage and asset management panel featuring SMPTE Fellow and industry expert Karl Paulsen. “Systems can be both complex and ambiguous, with terminologies that lead to misperceptions,” Paulsen said. “It’s really important to understand what you’re getting in the various types and layers that ‘manage media assets.’”

Scheduling around the NAB Show gives PBS technologists—who, according to McCoskey, represent some 20 percent of the nation’s broadcast stations—the opportunity to double down by attending both. “One of the greatest values of [our] conference is in connecting stations to other stations; having them share and teach each other,” McCoskey said. “[It’s] just an incredible opportunity to do face-to-face.” More station personnel than ever are slated to speak, and extra networking time has been added to the schedule.

Clarence Copeland (C) of Louisiana Public Broadcasting receives an award for the first NRT file taken to air from Bea Morse of PBS (L), and CTO John McCoskey at the 2011 PBS TechCon Besides knowledge sharing, McCoskey expects conference attendees to benefit from multiple “do more with less” seminars. “Production on a Budget,” for example, will detail how one small station covers live sports and what one of the largest is doing to automate live production. Other budget consciousness-raising topics include “Energy Efficiency in Broadcast” and a thread about generating income from the station’s tower.

David Pogue, Friday’s keynote speaker, will offer a glimpse into the future. The prolific technology writer, “New York Times” columnist and host of a recent NOVA mini-series will share observations from his self-described “front-row seat to the torrent of new inventions that come down the pike every year.” Pogue says he’ll focus on the few “that are causing major, disruptive changes, [such as] App phones, augmented reality and Web 2.0, and the effects they’re having on the next generation.” Pogue predicts PBS will be shaped “by bringing video to non-TV screens; challenging the infrastructure [and] making everything a more social, connected experience online; by opening two-way channels between producer and viewer... making everything on-demand, just as it should be!”

Publically supported, non-commercial broadcasting—whether taxpayer or pledge drive funded—has been a staple of American culture far too long to be brushed aside by shifting political winds. The technology used to create, manage and disseminate content is advancing at breakneck speed; events like TechCon are essential for PBS to adapt, survive and help future generations learn to read, write and think.