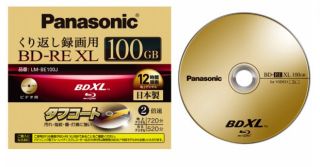 TOKYO: Panasonic this week announced a shipping date for the first ever triple-layer, rewritable Blu-ray Discs. The LM-BE100Js will begin shipping in Japan April 15.

Panasonic says the new triple-layer, rewritable Blu-ray Discs are fully compliant with the BDXL specification, and can hold up to 100 GB of data. That equates to about 12 hours of terrestrial digital HD (17 Mbps) or eight hours and 40 minutes of BS Digital HD (24 Mbps) video. The discs are said to have a special coating that protects them against dirt, fingerprints, scratches and other surface damage. The lM-BE100Js are priced at around $120 each, according to several reports.

Panasonic has been developing high-end Blu-ray Discs for years, creating a four-layer disc in 2006 that was said to have a 100 GB capacity. That version was coated with a material that was supposed to give the disc a shelf life of 100 years. These 100-year durability discs don’t appear to have made it to market, though they may have led to other upgrades.

The company announced two recordable Blu-Ray Discs last year at the NAB Show in Las Vegas, in “archival” and “century archival” grades. The archival grade disc was said to have a shelf life of 50 years at room temperatures of 77 degrees Fahrenheit and relative humidity of 80 percent. The century archival grade was supposed to last 100 years. The discs came in 25 and 50 GB models.