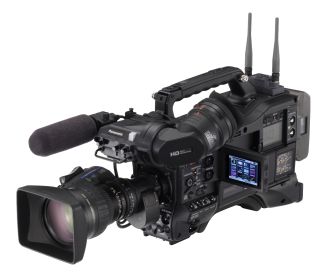 The camcorder features 24-bit audio in AVC-Intra 100/50, wireless metadata input capability via wireless LAN and proxy recording with uncompressed audio. It has two P2 slots and seven advanced gamma settings, including Film-Rec 600 percent mode. There’s a built-in reverse scan that accommodates unusual setups such as mounting the camera upside down, or outfitting it with an ultra prime or anamorphic lens adapter to create a 2.35:1 aspect image.

The HPX3100 weighs in at 8.6 pounds. Power consumption is about 34 watts. The camcorder itself is available now. The new AJ-YDX30 proxy board and wireless LAN will both be available in early 2011.