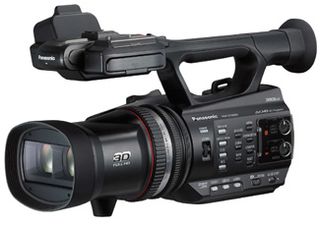 SECAUCUS, N.J.—Panasonic's AVC-Ultra compression scheme, the big technology focus for the company at the 2012 NAB Show, will not include the introduction of any products enabled with it. The chipsets are due out in 2013.

But lack of AVC-Ultra products should not take away from the finalization of the breakthrough technology itself. "It's basically a format for all applications, a compression scheme for all applications," said Joe Facchini, vice president, Media and Production Services at Panasonic Solutions Company.

Facchini noted that a station with camcorders, servers and editing devices utilizing the AVC-Ultra compression scheme could seamlessly move from one level of picture quality to the next. For example, "if you were at a broadcast facility using the lower bit rate, LongG for news, and then you had a promotion department that wanted to work in 4:4:4, and then you work with a local production company that's doing 2K and 4K," Facchini said, "the compression is all compatible, so editors and servers would all be able to handle it at every level."

Additionally, he said the AVC-Proxy mode, at 6 and 8 Mbps, will enable extremely fast ENG content delivery and offline edits of 720p and 1080p video. "We're going to be showing AVC-Intra in Proxy mode in the booth working with cellular wireless-based transmission systems that you can use instead of a satellite truck," Facchini said.

Could AVC-Ultra find a home in 3D production? "It hasn't been proposed yet, but theoretically you've got enough bandwidth," said Facchini. "In class 200 it might have the capability to record the left eye and the right eye, but we haven't really proposed that as a standard yet. It certainly is possible because at 2K and 4K resolution you could conceivably be utilizing two cameras, side by side, in 4K resolution, in 3D, and having the recording device built in."

In the meantime, AVC-Ultra opens the possibility to 4K solid state camcorders, "which is intriguing because the 2K and 4K cameras that are out there now don't have recorders on them," Facchini said.

To futureproof customers that need new camcorders now, Panasonic will introduce new cameras at NAB that can be upgraded to AVC-Ultra in 2013. At the time of TV Technology's interview with Facchini, few details on those camcorders were available. One camera making its NAB debut is the HDC-Z10000, a twin-lenses handheld 2D and 3D camcorder, which is AVCHD 3D/Progressive standard compatible.

Another pioneering product from Panasonic that is just beginning delivery is the AV-HS410, a compact, single M/E switcher. "It's kind of a new approach to the way we build switchers," said Facchini. "What's different is the open API and we provide an SDK. It's like writing an app for a tablet or smartphone. You can have a control application, or a colorimetry application, where you can modify the switcher. You could use a tablet to control the switcher from a distance, or have it integrated with pan and tilt zoom cameras. You can write apps right into the switcher that will then work with third party devices."

Panasonic will demonstrate its latest switcher, the AV-ITS410

At its booth, Panasonic will demonstrate the HDS410 running some of these third party applications. Optional support for stereo 3D functionality will make its debut at this NAB. Stereo 3D functionality requires installation of the AV-HS04M7D optional board, and an upgrade of the switcher itself.

A new family of professional LCD monitors will be unveiled. Facchini said the 9-, 15-, 18 and 21-inch monitors will be "lower cost monitors, good for things like confidence playback. At a station you don't necessarily need a ruggedized, high resolution monitor at every location."

Panasonic made a big splash at the 2010 NAB Show with the AG-3DA1, the world's first professional, fully-integrated Full HD 3D camcorder that records to SD card media. The AG-3DP1, a P2 version of that camera, has just begun shipping, and is finding a home for specific sports and production applications. But Panasonic saw the need for a less expensive one-piece 3D camcorder that customers could experiment with. That spawned the handheld HDC-Z10000, introduced last fall, with a sticker price of $3,500.

"Now you have a camera that people are willing to experiment with in 3D," said Facchini. "It's a very good 2D TV camcorder, works very well. And if people are using it, especially in teaching applications, they can experiment with it in the 3D mode. It's great for the teaching environment, where kids want to learn how to shoot 3D because they're going to work with 3D in the future. For that, it's a perfect camcorder.

"I think the Z10000 is the kind of product that can spur-on 3D in general. It could do for 3D what our affordable handheld AG-HVX200A camcorder did for P2."

Also new in the Pansonic booth will be the BT-LH1850, an 18.5-inch high-performance HD/SD LCD production monitor with 1366x768 resolution, featuring improved cost-performance and significant advances in functionality. With HD/SD SDI and HDMI connectivity, the LH1850 offers a 3D look-up table (LUT), which produces faithful color hues and smooth gradation, together with quick-response motion images.

Panasonic will be in Booth C3607 in the Central Hall.