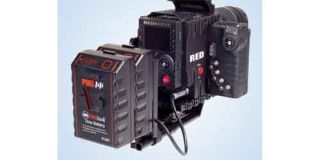 When combined, two PAGlink batteries have a capacity of 192 watt-hours and a current draw capability of 12A. If required, PAGlink allows a third or fourth battery to be added. The system consists of compact, lightweight batteries that could be used individually for small, low power-consumption cameras (DSLR, Blackmagic Digital Cinema, Canon C300/500) which could then be linked, combining capacities for set-ups that have a higher power consumption or that draw a greater current (Arri Alexa, Red One/Epic/Scarlet, Sony F55/F65 etc). These packs incorporate the high-current contacts required for such demanding applications, and give users high-capacity Li-Ion batteries that are legally transportable by passenger aircraft.

PAG has introduced new V-Mount Plates for cameras which do not allow users to mount batteries directly, such as Blackmagic, Canon EOS 5D & 7D, Canon C300/500, Nikon D800, Red Epic and Scarlet. The solution uses accessory/mattebox 15mm or 19mm rods to mount the battery, and the V-Mount Plate can be configured horizontally or vertically, above or below the rods, to not obstruct the camera display or other accessories.

A 12V D-Tap output is incorporated, allowing the power connection to be made using a PAG D-Tap Power Lead specific to the camera, featuring an in-line voltage down-converter available for 7.2V to 8.2V cameras. It also incorporates the contacts required for the battery to communicate with the camera data system.