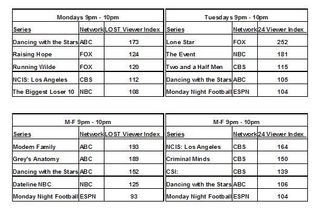 PORTLAND, ORE.: “Lost” and “24” were good for ABC and Fox even after the shows were gone, according to data from Rentrak. The audience measurement company conducted a series of viewer loyalty studies for ABC, which ran “Lost” for six seasons; and “24,” on Fox for eight seasons. “Lost” was on Mondays at 9 p.m. during the final season; “24,” at 9 p.m. on Tuesdays.

Rentrak found that regular viewers of both shows were more likely than the average viewing household to watch ABC and Fox programming in those time slots. This was interpreted as network loyalty. Rentrak created a viewer index to extrapolate the data. E.g., a 173 index for “Dancing with the Stars” meant that historically loyal viewers of “Lost” were 73 percent more likely to watch the show than the general population.

Through the first two weeks of the new fall broadcast season, viewers of both measured shows remained loyal to ABC and Fox, for the time slot on the same date and across the week: