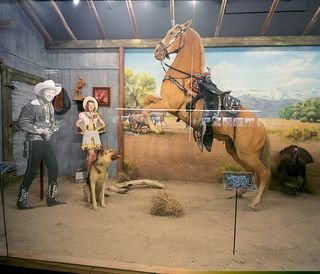 OMAHA, NEB.: A cable TV network has paid $266,500 for the late Roy Rogers’ late horse, Trigger, according to press reports. RFD-TV, a cable and satellite TV network devoted to rural issues, bought the stuff steed at a Christie’s auction in New York Wednesday. Rogers’ heirs put the family collection up for sale after it ceased to support itself financially at a museum in Branson, Mo.

Trigger was the famous golden palimino Rogers rode in many of his movies. The horse’s popularity rose to the extent that he got his own comic book. Trigger died at 33 years of age in 1965. Rogers had the horse stuffed rearing back on his hind legs and displayed him at the family museum in Victorville, Calif. The trusty mount and the rest of the Rogers collection was later moved to the Branson facility, which closed last year.

RFD’s owner, Patrick Gottsch, was said to have wanted to purchase the entire Rogers collection, but was unable to pull together a deal in time. RFD’s content covers horses, Agriculture, rural lifestyles and youth, music and entertainment and livestock auctions. The company recently opened a theater in Branson. The Rogers ethos fits right in, RFD executives said. The network has aspirations to start its own museum. In the meantime, the preserved equine will reside in either RFD’s office lobby or at Gottsch’s home.

Trigger in his heyday was said to be able to walk 50 paces on his hind legs. The horse’s dancing skills are preserved on video: