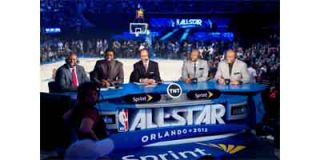 HOUSTON—The NBA All-Star Game is returning to Houston’s Toyota Center Feb. 17 for the first time since 2006 on TNT.

Turner Sports and NBA TV, NEP, Bexel and CP Communications will collaborate on producing this year’s event, which will test fiber-optic capabilities and give TNT a chance to further integrate its second-screen viewing experiences.

In the past, the game has been broadcast in 3D, but Vice President of Operations and Technology for Turner Sports Tom Sahara says there was not enough demand for a 3D broadcast this year. He added that the use of any 4K technology will be experimental.

Instead, the emphasis will be on the second- screen experience, an expansion of alternate angles and social media integration offered with TNT Overtime, the online platform that the NBA uses to show alternate camera angles and social media interaction for Thursday night primetime games. “Technology has really enabled us to get more out of the game, more access to audio signals, camera signals,” Sahara said. “We’ve been able to shoot them to these alternate distribution platforms.”

He added that viewers have engaged with TNT Overtime “because it allows them to really follow the game wherever they are, and if they are watching the game on television, it also gives them a companion product that they can see things that they don’t see on television.”

According to Chris Brown, director of technical operations at NBA Digital, the division of the National Basketball Association which oversees its online and mobile presence, this emphasis on alternate camera angles is very key from a transmission standpoint. Advances in compression technology enable the production team to “take multiple video streams and push them down a single circuit and then recreate those images back on this end and put them out over the Internet, and you still have a crisp image. You don’t have all of the artifacts that you used to, especially on a sport that has as much movement as basketball.” This means that much of the work to support TNT Overtime can happen back in Atlanta.

The annual NBA All-Star event has grown to three days’ worth of entertainment-style programming, according to Brown, who says this is reflected in the technology needed to pull it off. Technology advances have also ramped up viewers’ expectations.

“The facility itself has gone through renovations,” Sahara said. “They have a very large, high-definition video board, and we will be working with them to share many of our cameras with them to enable them to produce a very good, engaging consumer experience within the Toyota Center itself.”

Both Sahara and Brown described the video board as comparable in scale to the one at the Dallas Cowboys stadium, which is 72 feet high by 160 feet wide, making it the largest of its kind in the United States. However impressive, the Toyota Center’s display presents challenges in shooting the game; Brown says in years past they had employed a cablecam, but the board’s size precludes this option. But they will still have a full arsenal of cameras, which includes slo-mos, RF steady cam and jibs.

Although “there was a fair amount of fiber back in 2006,” according to Lee Estroff, vice president of account development for Burbank, Calif.-based broadcast and production service provider Bexel, the reliance on fiber-optic technology is probably the most significant change since the last time the All Star Game was at Toyota Center, Sahara said.

“We are distributing many of our audio signals around the arena on IP infrastructure, so we’re using audio over IP as the distribution format rather than individual audio signals on individual paired wire that are going into audio over IP systems and being able to share audio amongst the various customers, the in-house video production and the stage audio productions,” Sahara said.

Brown added, “We’re also hoping to eliminate a lot of or any hum or buzz just due to traditional copper and by landing on a lot of audio sources right at the fiber and breaking it out right at the floor.”

For the third year, All-Star weekend will also include a Sunday pregame concert, which presents the production team with its own set of challenges as they coordinate with NBA Entertainment. The concert will be held at the convention center’s Jam Session, a few blocks away from the Toyota Center and Brown says that in order to merge intercom systems and share HD video signals, they will lay fiber between the two buildings.

Compared to 2006, Sahara noted “we were just a couple years into our HD production, so our complement of trucks and the number of cameras that we put out were quite a bit smaller than what we will be using for our games in 2013.”

In fact, the number of trucks has nearly doubled. In 2006, all of the office and support trailers and mobile units fit on a block of Bell Street between the Toyota Center and its parking garage. This year, Brown says, office and support (one main unit and its support trailer) will be moved to an adjacent parking lot, separate from the main compound, because of space constraints.

According to Mike Werteen, senior vice president of client services for NEP Supershooters, this year the Pittsburgh-based provider of mobile production trucks will provide its SS24, the primary truck for the All Star Game itself; NCP10, which will focus on the Sprite Slam Dunk contest to be held Saturday, Feb. 16 in the Toyota Center and also has a second support unit; NCP11, which will cover the “Inside the NBA” studio show; SS11, to be used for Thursday night’s shoulder programming; and ESU2, the shared resources mobile unit that also houses transmission.

These mobile units will be utilized in addition to Turner’s own recently updated truck, as well as Bexel’s BBS1, which will provide edit support for the creative team. A trailer from Elmsford, N.Y.-based A/V solutions provider CP Communications will house the submix and Nexus Star audio router system and NBA Entertainment will use a Calrec Alpha for audio support.

Bexel is responsible for All-Star’s edit support and event facilities management, providing a centralized point to coordinate fiber optics. Like NEP, the company has been involved in providing turnkey solutions for Turner and the All-Star game for years, providing more than just the Apple Final Cut Pro editing software and support.

Estroff explained that although setup for the event begins a week in advance of the All Star Game, “within three days, we’re fully operational.” He added that saved settings and documentation from the previous setups are key.

Estroff says has worked on the All-Star event for over two decades and the advantages of working with Bexel for NBA Digital and Turner are found in the shared history. “We know the players. We know the challenges,” he said. “We know what the individual requirements are going to be, and we know the politics.”