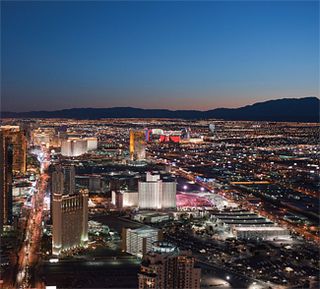 LAS VEGAS – For the first time in nearly seven years, the mood surrounding an upcoming NAB convention is one of quiet optimism.

Perhaps it’s the surfeit of political advertising dollars that flushed into local broadcasting markets last year. Or the speedy state of technological advancement, which moved the industry from the DTV transition into the realm of the new without haste: mobile television devices, Internet-connected TVs and the promise of stereoscopic TV sets into millions of homes. Perhaps it’s the welcoming sense that one of the nation’s worst economic dips might be behind us.

The NAB organization itself seems to think so: “The momentum and the positive vibes are palpable,” said Dennis Wharton, executive vice president of Communications for NAB. “I don’t think it’s related to any one thing, but rather a general sense of [improvement]. They say the rising tide lifts all boats.”

The numbers seem to suggest as much. In addition to positive benchmarks between HDTV set sales and adoption of wireless HD video technologies, Las Vegas itself seems ripe for a rebound, with convention visitation rising more than 12 percent year.

It isn’t all clear sailing ahead, however. Television broadcasters face a number of issues that could have a significant impact on the future of broadcast television. Foremost is the debate over the National Wireless Initiative, whose goal is to create a nationwide wireless network using, in part, reclaimed broadcast spectrum. While the goal is lofty – providing wireless access to 98 percent of the nation and potentially reducing the national deficit by approximately $10 billion – the impact on local television could be costly to stations looking to build out ancillary services.

“Reclaiming the spectrum will put a crimp on some of our plans if [it] goes through,” Wharton said. At the show and beyond, the NAB’s goal is attempt to “make sure the FCC’s focus is on technology that will give broadcasting a real and vital future,” he said.

Meredith Attwell Baker Las Vegas will also be a pivotal venue for discussion on retransmission consent. In early March, the FCC began the process of re-examining the retransmission consent process, attempting to determine if changes should be made to the way cable and satellite firms compensate television broadcasters for use of their network programming. MSOs continue to argue that the FCC should require more oversight over the potential carriage disputes. Broadcasters counter that cable and satellite providers should continue to pay for the broadcast television signals, and that stations have the right to pull broadcast when negotiations break down. The FCC is exploring how the process might be reformed.

The discussion will continue at NAB itself, where a contingent of FCC staff, including FCC Commissioner Meredith Attwell Baker, will touch on regulatory issues during sessions like “The Washington Face-Off” and “The FCC and You.”

Yet despite these unanswered variables, the mood is colored optimistic as the industry heads to Las Vegas, in part buoyed by the strength of technologies like Internet-connected TV sets, mobile television and 3D TV. The ongoing consumer-centric focus is due in part to the show’s wider concentration on technologies and applications that no longer fit neatly in the engineering-only realm.

“Fifteen years ago, the NAB made a conscious decision to move the show beyond broadcast,” Wharton said. “That was considered somewhat controversial at the time. We’ve included competitors in our conversations. But by broadening out, we exposed our broadcasters to more business opportunities.”

Another priority at the NAB Show will be the rollout of mobile TV. Deployment announcements are to be made at the show, including updates from the ATSC, Open Mobile Video Coalition (OMVC) and two leading mobile TV groups who are working on business models for new services. The two broadcast consortia groups will be highlighting technology behind the scenes, a critical component that will allow mobile DTV to be offered as a free service as well as on a subscription basis.

“It’s a very exciting time for mobile DTV, as the technology moves to the next level of wide-scale deployment,” said Anne Schelle, OMVC executive director. “Viewers appreciate and want access to real-time local news, weather and emergency information wherever they go. They don’t want to be tethered to their living room TV anymore.

Anne Schelle In addition to showcasing mobile DTV broadcasts of 3D TV programming and a spate of new receivers and accessories in the Mobile DTV Pavilion, several local television stations will be working to deploy live, local TV on mobile devices at the show. Nationwide, more than 60 stations are broadcasting mobile DTV, Schelle said.

The industry is committed to this,” Wharton said, repeating the oft-mentioned finding that mobile TV deployment could boost the broadcasting bottom line by as much as $2 billion. “We see this as the future of TV.”

In January, more than two dozen consumer mobile TV products were introduced to the market, and the two broadcaster consortia—Mobile500 and Mobile Content Venture—are currently working on the next stages of deployment. “The beneficiary is the American viewer and consumer, who will now have access to both stunning high-definition TV at home and mobile digital TV wherever they go,” Schelle said.

Mobile TV will be a strong focus throughout the Broadcast Engineering Conference, where speakers will touch on current implementation of mobile DTV, in-the-field testing of the technology, and the infrastructure behind technologies like STLs and repeaters. At the session “Mobile DTV Implementation: A Status Report,” the ATSC will offer an update on the standardization and implementation process.

Despite a quiet, persistent buzz that sometimes questions the validity of the business model, the convention will also have a strong focus on 3D technologies.

“Some have questions over whether this is a viable business model; only time will tell,” Wharton said. “But a huge number of exhibitors have invested a lot of money in this technology.”

Sessions will touch on engineering issues like “General-purpose 3D Video Signal Processing” and “Efficient Delivery of 3D-TV for Broadcast Systems” as well as new conferences like DCS 2011, which will touch on cinema, broadcast and broadband. The convention will again host a 3D Pavilion to show off advances in 3D sets and no-glasses display monitors.

Despite the aahs that 3D television may get on the show floor, the big buzz this year may in fact be the concept of the so-called “over the top TV,” known as Internet TV or TV over broadband. At the Broadcast Engineering Conference Opening, speakers will touch on the evolution of television receivers and the combination of Internet-enabled features.

The convention will also have several new conferences, including an expanded focus on telecom technologies and cloud computing, among others.